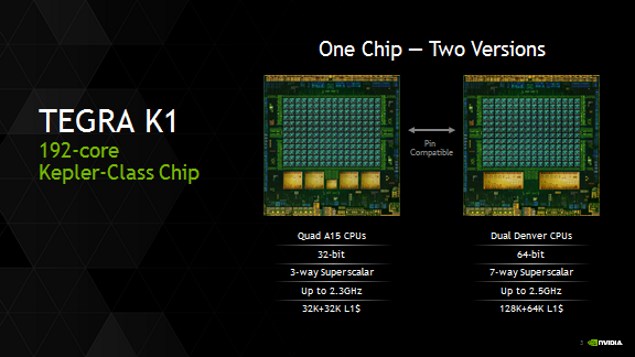 Nvidia has for the first time released specific details of the 64-bit version of its ARM-based Tegra K1 SoC, which was announced alongside the 32-bit version in early 2014. The company claims that its 'Project Denver' architecture will be the foundation of the world's first 64-bit ARM processor for Android. The announcement was made at the Hot Chips conference in Cupertino, California.

The SoC will consist of a dual-core 'Project Denver' CPU and the same 192-unit graphics processor used by the existing 32-bit version. Whereas the 32-bit SoC uses a quad-core CPU derived from ARM's Cortex A15 design, the 64-bit 'Project Denver' CPU was designed in-house by Nvidia. Both versions will be totally pin-compatible with each other, allowing manufacturers to simply drop the new chip into designs built for its sibling.

The 'Project Denver' architecture itself has been engineered to emphasise single-threaded throughput, with up to seven concurrent micro-ops executed per clock cycle. Nvidia describes the dual-core Tegra K1 implementation as able to achieve "significantly higher performance than existing four- to eight-core mobile CPUs on most mobile workloads."

The K1 will employ a three-tiered cache structure with a 128KB 4-way L1 instruction cache, a 64KB 4-way L1 data cache, and a 2MB 16-way L2 cache accessible to both cores. A further 128MB cache in main memory will be used to store frequently-used instructions which are dynamically optimised into dense microcode routines to maximise the benefits of instruction-level parallelism.

Nvidia expects that devices based on the 64-bit K1 will ship this year, but has not provided specific information about partners who will launch them, or even its number of design wins. HTC is rumoured to be working on an 8.9-inch tablet codenamed 'Volantis' which could come to market as a "Nexus 9". Google's 'Project Tango' development kit tablet with depth-sensing and motion tracking hardware could also feature the 64-bit Tegra K1.

Despite early successes with the Tegra line, Nvidia has not had many takers for the Tegra 4 and Tegra K1, reportedly due to power management and performance issues. The 32-bit Tegra K1 has so far only been seen in Nvidia's own Shield tablet, the Xiaomi MiPad, and Acer's Chromebook 13.

ARM licensees have been racing to release 64-bit chips for smartphones and tablets ever since Apple announced the iPhone 5s powered by its in-house A7 processor in late 2013. Intel's x86 Atom CPUs are also capable of 64-bit execution.