Share on Facebook Tweet Snapchat Share Reddit Email Comment
It seems Google's second generation Nexus tablet, the Nexus 7 (2013) is all set to hit Indian shores as the 3G LTE variant of the device has been listed on Play Store in India for Rs. 25,999. Google has listed the Nexus 7 (2013) 3G and Wi-Fi model with a 'coming soon' tag but there is no word on the possible availability of the tablet. 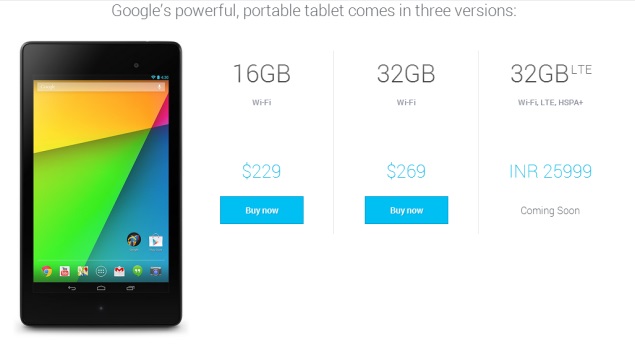 The search engine giant launched the second-generation Nexus 7 in July this year alongside the unveiling of the new Android 4.3 Jelly Bean platform.

The Nexus 7 (2013) tablet comes with a 7-inch full-HD display (1920x1200 pixels), implying a boast-worthy pixel density of 323ppi. It also features scratch-resistant Corning glass. It is powered by a quad-core Qualcomm Snapdragon S4 processor clocked at 1.5GHz, and features 2GB of RAM, apart from 32GB of inbuilt storage (with no SD card slot). The new Nexus 7 also features a 5-megapixel rear camera and a 1.2-megapixel front-facing camera.