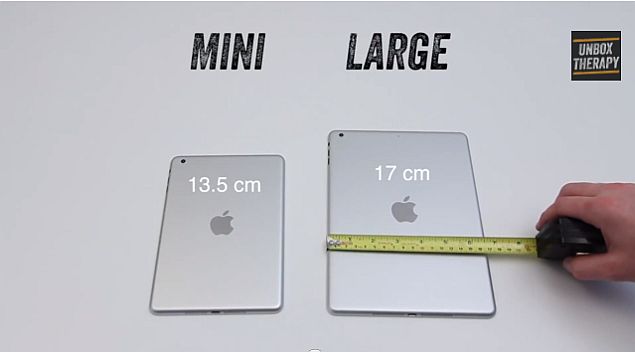 Apple is expected to refresh its iPad and iPad mini tablets this fall and we have already seen some leaked images and videos claiming to feature parts of the next-generation iPads.

A few days back, Unbox Theory posted a video on YouTube comparing the alleged back and front panels of the new iPad with that of the current iPad, clearly showing how the fifth-generation iPad would be much narrower and feature a form factor similar to that of the iPad mini.

The same user has now posted a new video in which he compares the purported back shell of the next-generation iPad mini with that of the alleged casing of the fifth-generation iPad and the current iPad mini.

A number of rumours including a report by the credible Wall Street Journal, have suggested that Apple is modelling its next-generation iPad on the iPad mini in terms of design and form factor. The WSJ report suggested that the new iPad will feature the same touch-panel technology that's seen in the iPad mini, making it thin and light, and adds that Apple intends to use the film-based touch panel used in the iPad mini instead of the glass-based one that is sported by the full-sized iPad.

Pictures of alleged back panels of the next-generation iPad and iPad mini had also appeared online on a website. The iPad mini panel looked similar to the rear housing of the current iPad mini in the images, however, the Apple logo on the casing had been carved out and not just printed on the panel. Apart from this, the housing was not much different from that of the current iPad mini. The picture had also revealed that the casing would not have the 'iPad' branding.
Comments