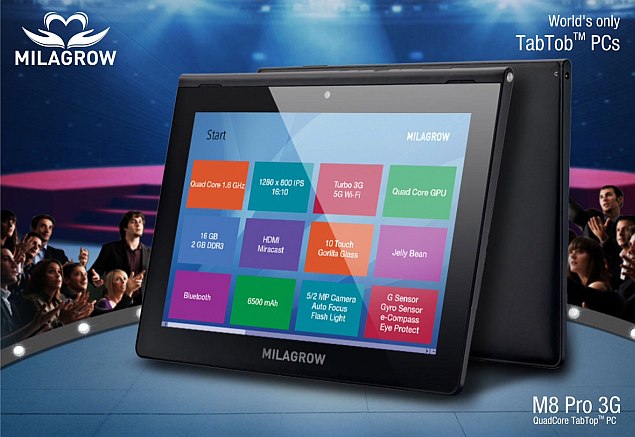 Milagrow has extended its portfolio of 'TabTop PC' devices by launching the M8 Pro 3G tablet at Rs. 25,990.

The Milagrow M8 Pro 3G runs Android Jelly Bean, though the exact version has not been specified. It features a SIM card slot for data connectivity. The tablet features a 9.4-inch wide-angled IPS screen with a WXGA (1280x800 pixel) resolution, protected by a Gorilla Glass coating.

The M8 Pro 3G tablet is powered by a 1.6GHz Rockchip 3188 quad-core Cortex A9 processor paired with a Mali 400 GPU, and 2GB of DDR3 RAM. The Milagrow M8 Pro 3G includes a 5-megapixel rear shooter with an LED flash and a front-facing 2-megapixel shooter for video calling. It bears 16GB of inbuilt storage, which can be expanded up to 64GB via microSD card.

As the name suggests, the M8 Pro 3G comes with 3G connectivity. It also features Wi-Fi 802.11ac, HDMI Miracast, USB, Bluetooth, and GPS connectivity. According to its 'exclusive' online listing on Snapdeal, the M8 Pro 3G features a 6700mAh battery, rated to deliver a standby time of 2000 hours on 2G, and 2200 hours on 3G. Milagrow claims it delivers 12 hours of battery life on normal usage.

The Milagrow M8 Pro 3G also includes multi-user features as it can support up to eight users, out of which three can be logged in simultaneously.

On the tablet's launch, Rajeev Karwal, Milagrow founder, stated "We are excited to launch the new M8 Pro 3G. This TabTop PC packs performance of the latest quadcore technology with an unrivalled feature set of mobile sensors and user interface with an optimum battery life. The TabTop Pc is specially designed for users who demand serious computing power from their mobile devices and can be used by professionals on the go and also for leisure purposes such as video streaming"