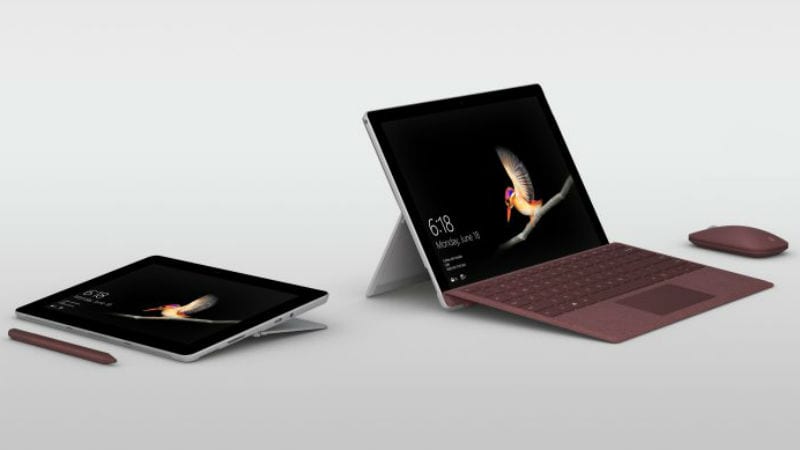 Microsoft has officially launched the next product in its Surface lineup, a budget tablet called Surface Go. The new Surface Go is a 10-inch Windows tablet that looks like the Surface Pro, but with prices starting at $399 (roughly Rs. 27,400). All the features that are familiar about the Microsoft Surface Pro are present, including the PixelSense display, design cues, and an inbuilt kickstand. However, in order to keep the cost low, the tablet packs more modest internal components. It is available for pre-order in a few countries starting July 10 and will start shipping on August 2.

As mentioned, the Surface Go follows Microsoft's Surface design and it appears to be a smaller version of the Surface Pro that was introduced in 2014 with the Surface Pro 3. This device is also intended to compete with the Apple iPad. The tablet sports a 3:2 aspect ratio PixelSense display (1800x1200 pixels). It comes with the company's signature integrated kickstand with unlimited positions. It is equipped with a front camera with facial recognition technology.

Additionally, the Surface Go comes with the company's proprietary Surface Connector port for charging and connecting to a desktop dock. Microsoft has also packed a USB Type-C 3.1 port that can charge the tablet or transfer data to external devices. While the corners have been a bit rounded compared to the Surface Pro, it has the same magnesium design found in Surface devices. The company is claiming nine hours of battery life.

Under the hood, the Surface Go is powered by a 7th generation Intel Pentium Gold 4415Y processor. It will be available in two variants - 4GB of RAM/ 64GB of eMMC storage and 8GB of RAM and 128GB SSD storage, a report by The Verge claims. The premium model of the Surface Go will be priced at $549 (roughly Rs. 37,800). Panos Panay, Chief Product Officer, Microsoft, says in a blog post that the company will initially release Wi-Fi versions of the Go, with an LTE equipped model to come later this year.

The Surface Go runs Windows 10 S runs out-of-the-box, This means users will only be able to access the Edge browser and apps available in the Microsoft Store. However, they can choose to upgrade to full Windows 10 Home for free.

Similar to the Surface Pro, the Surface Go comes with an optional keyboard cover and the optional Surface Pen. Microsoft says that the display supports a Surface Pen with "4,096 levels of pressure sensitivity, low pen parallax, low latency, and precision for accurate note taking, drawing and computer-aided design." While the keyboard will reportedly increase the price of the Surface Go up by at least $99 (roughly Rs. 6,800), the Pen will add another $99. Also available is the optional $34.99 (roughly Rs. 2,400) Surface Mobile Mouse.

The Surface Go will be available for pre-order beginning on July 10 in countries like the US, Canada, Australia, New Zealand, the UK, Ireland, France, Germany, Austria, Belgium, Luxembourg, Netherlands, Switzerland, Denmark, Finland, Norway, Sweden, Poland, Italy, Portugal, and Spain. While there are a few countries where it will arrive later this year, there is no clarity on whether the Surface Go will make it to India.