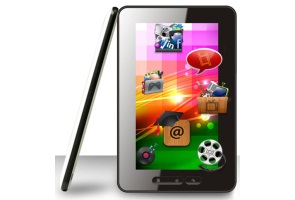 Highlights
Another day, another Ice Cream Sandwich tablet; Indian manufacturer Micromax has announced the launch of Android 4.0 powered Funbook today. Running on a 1.2GHz processor, this tablet will be sold for Rs. 6,499 in the country.

Indian tablet market is increasingly getting more and more competitive. Just a day after HCL showcased Me Tab U1, Micromax's Funbook has landed in the country. It features 7-inch capacitive display, 512MB of RAM, and 4GB Internal storage. Funbook also supports 3G connectivity via USB dongle and Micromax is bundling a Tata Photon EVDO datacard with the tablet.

Among other features, Micromax Funbook will come with pre-loaded e-learning app that will have host of educational content from Pearson, Everon, GK Publishers, Scholarshub, Vidyalankar, Universal Tutorials, CAPS and Zion.