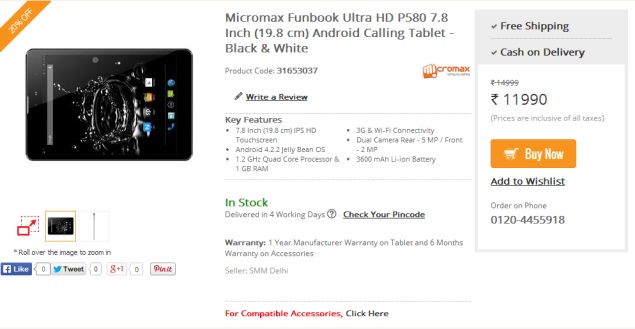 Other specifications of the Funbook Ultra HD P580 tablet include 8GB of inbuilt storage (roughly 5.5GB of user-accessible storage, as per the listing), which is expandable up to 32GB via microSD card. Notably, the Funbook Ultra HD P580 tablet comes with SIM support and offers voice-calling as well as 3G connectivity. A 5-megapixel rear camera is also onboard, apart from a 2-megapixel front camera. The tablet supports Bluetooth, FM radio, GPS/A-GPS, and Wi-Fi connectivity options.

The Micromax Funbook Ultra HD P580 tablet runs on a 3600mAh battery, but talk time and standby time figures have not been provided. The tablet has been listed at HomeShop18 and was first spotted by FoneArena.

The Funbook P280 comes with 4GB of inbuilt storage, which can be further expanded up to 32GB via microSD card. Along with the support for 3G connectivity via dongle, the Funbook P280 also includes standard Wi-Fi connectivity along with USB 2.0. The tablet packs a 2400mAh battery, which as per the company will provide up to 250 hours of standby time. The Micromax Funbook P280 comes preloaded with apps such as Spuul, Opera Mini, Kingsoft Office and M!Live.

Idea and Opera partner to offer Web Pass for short-term mobile Internet needs
Google did not make a bid for WhatsApp: Sundar Pichai