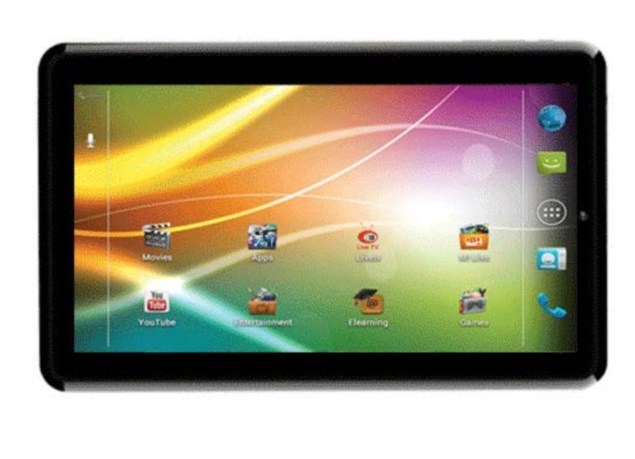 Micromax is all set to launch a brand new tablet in the Indian market. This tablet is dubbed Micromax Funbook P600 and is already retailing on the deal site Snapdeal.com for Rs. 9,499.

Micromax Funbook P600 sports a 7-inch capacitive multi-point touch screen. It is powered by Qualcomm MSM8225A ARM Cortex A5 1GHz dual-core processor along with 512 MB of RAM. The table comes with 2GB of internal storage (of which 0.96GB is user accessible) and can be expanded to up to 32GB through microSD card. Micromax Funbook P600 runs on Android 4.0.4 (Ice Cream Sandwich) operating system and it supports voice calling.

For camera, there is a 2-megapixel shooter in the front and back of the device. There is no mention on the battery that is in this device but the company claims, that it will give a talk-time of 10 hours, video playback time of 4 hours and standby time of 224 hours. Connectivity options include 3.5mm audio jack, 3G and Wi-Fi. Micromax Funbook P600 does not support Bluetooth connectivity.

Micromax had introduced the first tablet in April 2012 in the form of Funbook. It is a 7-inch tablet that has a display of 800X480 pixels. It comes with a 2800 mAh battery and runs on Android Ice Cream Sandwich. Micromax Funbook is powered by 1.2 GHz processor with 512 MB of RAM.

Micromax is also offering a 10-inch Micromax Funbook Pro tablet. It has a display resolution of 1024X600 pixels and 8GB of internal memory, which can be expanded up to 32 GB. There is also a VGA front camera on board. It is a Wi-Fi only tablet that runs on Android Ice Cream Sandwich.