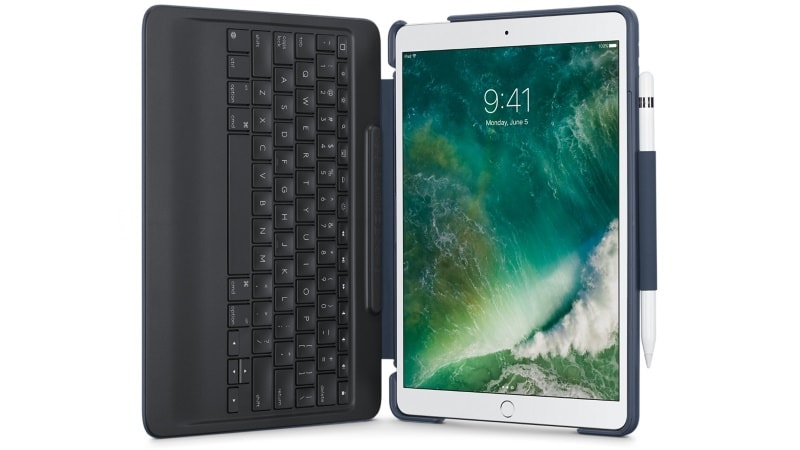 Apple, at its WWDC 2017 conference for developers on Monday, announced a slew of new devices along with a refreshed lineup of some old ones. It launched two new iPads - 10.5-inch iPad Pro and 12.9-inch iPad Pro at the keynote event. Following the launches, Logitech has announced new Slim Combo case that includes a protective cover and a detachable keyboard for the newly introduced iPads.

The Logitech Slim Combo is claimed to be a versatile case that will enable four use modes for the iPad Pro models - typing, viewing, FaceTime, and reading. This will be handy when you are on a go and want to send an email, draw a graph using Apple Pencil, and video call using FaceTime.

The backlit keyboard of the Slim Combo case is detachable, which means you can easily pull it off your iPad, and it connects to the iPad Pro through its Smart Connector while getting the juice from the iPad itself. This will save you from requiring to charge the case externally.

In addition, the Slim Combo case can be rotated within a 50-degree range that gives good viewing angles while also offering a 360-degree protection. The case also comes with an Apple Pencil holder so that you don't lose it while carrying it in transit.

"In the past, you were bound to a workspace with a PC, and used your tablet for quick messages or entertainment when you weren't in the office; that's not the case anymore," said Michele Hermann, vice president of mobility at Logitech, in the company's release. He added, "To be a pro today, you need the power of the PC, but more easily available whether you're on a train, at the park, in a meeting or wherever you need to be. The Slim Combo unleashes the power of iPad Pro to bring you the future of personal computing; a future that's easier, faster and more fun."