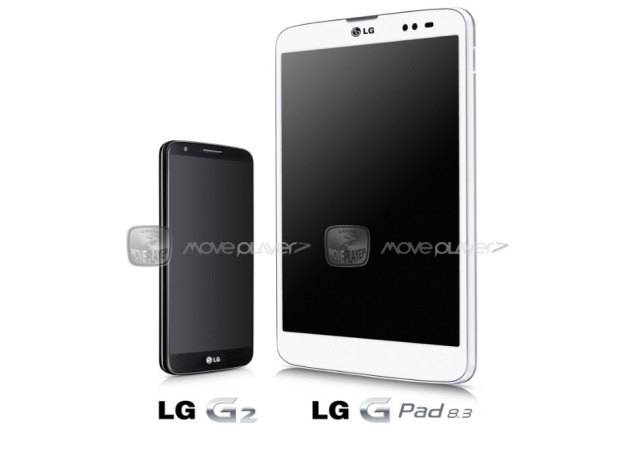 LG's G Pad tablet official unveiling might still be a few days away, but the tablet has been allegedly spotted in press render shots.

Moveplayerseems to have come across the alleged LG G Pad 8.3's press render shots. The image, of course, does not reveal anything about internal specifications of the rumoured tablet, but shows the device in its full glory. The Korean site has posted an image of G Pad 8.3 in white colour pictured alongside LG's flagship smartphone, the LG G2.

The tablet follows similar designing characteristics as the G2 with curved rectangular edges, no physical buttons on the front panel and sports an offset front-facing camera, an underlining notification LED and what is most likely the LG branding beneath the speaker grill. The image also reveals that the right side may feature the power button.

Further the site also notes that the alleged LG G Pad 8.3 will, unsurprisingly, offer an 8.3-inch display, with a resolution of 1920x1200 pixels and will most likely be unveiled at the IFA 2013 at Berlin.

Additionally, the company has released a teaser video for the upcoming tablet on YouTube. Lately, the South Korean major has been launching pre-launch teaser videos for its upcoming devices, the last being the LG G2. The latest teaser video shows people on the street sharing their experience with tablets and the expectations for a new tablet. The video starts with, "What would make a tablet just right for you?" tagline and ends with "Just right for you.... LG G Pad 8.3".

Earlier, a Korean website claimed that LG's long-time rumoured tablet will be showcased at IFA 2013 in Berlin next month, and will hit the market by end of September. The site also noted that the tablet will come in two variants LTE and Wi-Fi. The Wi-Fi version of the tablet will head to the Korean market while the LTE variant will be sold by Verizon in the US, claimed the report.