The tablet comes with an option to use cellular data connectivity and features a 10-inch full-HD Gorilla Glass display. The processor on ThinkPad 10 is a quad-core Intel Atom Z3795 processor clocked at 1.6GHz, with memory options of 2GB or 4GB of RAM. The tablet comes in 64GB and 128GB storage options, and supports microSD storage expandability. It packs a primary 8-megapixel camera with flash and a front-facing 2-megapixel camera.

With the optional ThinkPad Tablet Dock or USB3.0 docking station (179.99), users can also add an external display, mouse, and a keyboard. The Quickshot Cover ($59) protects the camera and launches the app automatically for clicking images.

"Customers want a versatile device that adapts to their way of life and offers uncompromised productivity whether in the office or on the move," said Luis Hernandez, vice president and general manager, ThinkPad, Lenovo. 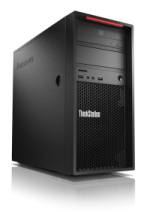 Alongside the tablet, Lenovo has also announced the entry-level ThinkStation P300. The redesigned chassis in the new workstation no longer features a bulky handle. It now has an "intuitive red touch points and extended lip in the front and the back for easy carrying and deployment."

The ThinkStation P300 also features the FLEX module that allows users to add only the components they need. The FLEX module supports a combination of an ultra-slim optical drive, 29-in-1 media card reader, IEEE 1394 Firewire, and eSATA.
Comments