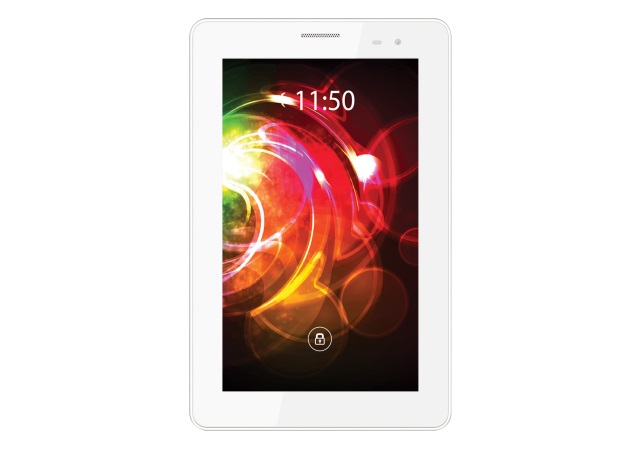 Lava has launched its latest Android tablet for the Indian market, the E-Tab Ivory, at Rs. 10,199. The newly launched tablet joins the E-Tab tablet portfolio which already includes E-Tab Z7S, E-Tab Connect and E-Tab. The company states in a press note that the all new E-Tab Ivory tablet is a successor to its Connect range of calling tablets.

The all new Lava E-Tab Ivory is company's first dual-SIM (GSM+GSM) tablet based on Android 4.1 Jelly Bean and comes with voice-calling support as well. It features a 7-inch display with 1024x600 pixels resolution and is powered by a 1.2GHz dual core MediaTek processor along with Power VRSGX531 Ultra GPU. It comes with 1GB of RAM and includes 4GB of inbuilt storage which is further expandable up to 32GB with the help of microSD card.

The Lava E-Tab measures 194x120.5x10.8mm and packs a 3000mAh battery. The Lava E-Tab Ivory sports dual cameras a 2-megapixel rear camera and a front-facing 0.3-megapixel camera. Connectivity options on the tablet include Wi-Fi, Bluetooth, GPS and 3G. The tablet also comes with preloaded games like Total Recall HD and NFS HD while bundled apps on the tablet include OLX, PayTm, Twitter, Facebook and WhatApp.

Commenting on the launch, S.N. Rai Co-Founder and Director, Lava International said, "E-tab Ivory is the latest proof of Lava's innovation excellence, of course based on the MediaTek's technology. We are pleased with the partnership with MediaTek and are very confident of the success of our new product powered by the MediaTek technology."