iPad mini (2019) externally looks similar to its predecessor, though it comes with a new model number

The iFixit team remarks that there is one noteworthy exterior change between the iPad mini 4 and the new iPad mini, which is the fresh model number, A2133, on the chassis. Apple also has also removed the regulatory markings from the new model -- a move similar to how the company ditched all such markings from the iPhone 8, iPhone 8 Plus, and the iPhone X in 2017.

Unlike the previous model that had a 1.2-megapixel selfie camera, the new iPad mini is found to have a 7-megapixel front-facing sensor along with an f/2.2 lens. This is claimed to be the same camera setup that was available on the 10.5-inch iPad Pro. The engineers at iFixit have also seen the new microphone array that sits close to the selfie camera.

The iPad mini (2019) also comes with Apple's True Tone display technology that has been seen during the teardown process clearly. There are ambient light sensors that power the technology to adjust the screen brightness as per the environmental conditions.

The teardown also helped reveal that the new iPad mini model has Bluetooth v5.0 support. Further, it confirms the presence of 3GB of RAM.

Despite some upgrades over the iPad mini 4, the new iPad mini is observed with the same battery size that is rated for 19.32Wh. The lithium-polymer battery model, however, is different. 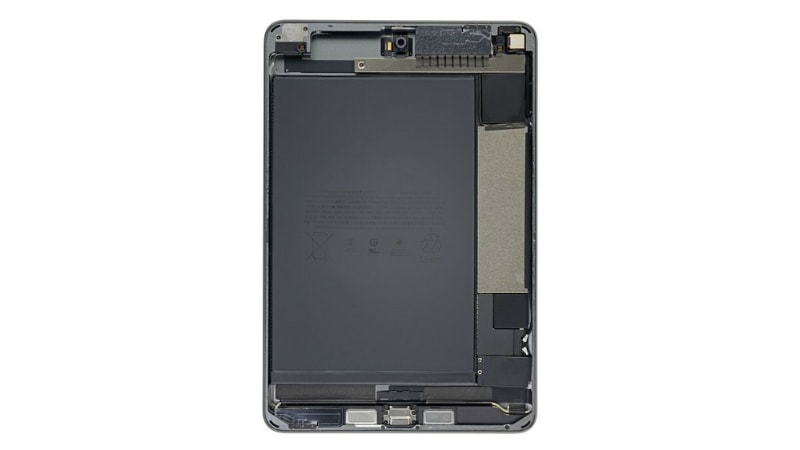 Coming towards the repairability part, the iPad mini (2019) -- similar to other Apple products -- isn't an easy-to-repair device. Many components on the new tablet model are found to have a modular design and can be replaced independently, though a large amount of adhesive on many components and cables make its overall repairability quite complicated.

Similarly, the iFixit team has noted that parts such as Lightning port and home button are tough to remove. Battery replacement is also said to be "unnecessarily difficult" albeit possible. Overall, the iFixit team has given the iPad mini (2019) a repairability score of 2 on 10.

To recall, the iPad mini (2019) was unveiled last month with Apple Pencil support. While the base model with 64GB Wi-Fi only configuration comes at Rs. 34,900, the iPad mini 256GB variant price goes up to Rs. 48,900. The device comes in Silver, Space Grey, and Gold colour options.

The iPad mini (2019) is yet to reach India. However, it is already on sale in 27 countries, including the US, UK, Germany, Australia, Canada, Singapore, Italy, and Japan.