Thank you for joining us. Stay tuned for detailed coverage of all the new Apple launches on NDTV Gadgets.

The new iPad mini will be available starting November

Phil Schiller is back on stage

Jony Ive talking about the new iPad Air in a video

The iPad 2 will not be discontinued

iPad Air ships November 1, but India is not in the list of countries that get it in the first wave

The new iPad Air comes in Silver and White, and Space Gray and Black colours and starts at $499

The iPad Air has a 43 percent thinner bezel

Cook is talking about the success of the iPad

Tim Cook is now back on stage

Apple calls it the biggest day ever for apps.

The iWork apps have also been made free

The new iWork for iCloud

Apple is adding collaboration for iWork for iCloud

The new Pages, Numbers and Keynote apps are being demoed on stage

Cue back on stage to talk about new iWork apps

All iLife updates are available today

A demo of Garageband

New iLife apps are being announced

The Mac Pro is assembled in the USA

A video showcasing how the Mac Pro was created is now being played.

Some testimonials from Mac Pro users

Schiller is detailing the hardware specifications of the Mac Pro

OS X Mavericks will be available on the Mac App Store, starting today

Federighi is now demonstrating Mavericks on a Mac

Maps and iBooks have also arrived on the Mac with Mavericks

Federighi is now detailing other features of Mavericks including support for multiple displays and updated native apps.

Up to an hour longer web browsing with Mavericks, claims Apple

Federighi is now talking about the power efficiency features of Mavericks.

Cook takes a nice dig on the competition

Tim Cook's now talking about the iPhone 5s and 5c launch, calling it the biggest iPhone launch ever.

Welcome to our live blog. The Apple event's started with a video.

Apple is hosting a media event at 10:00 AM PST on Tuesday. Live coverage begins shortly before that. 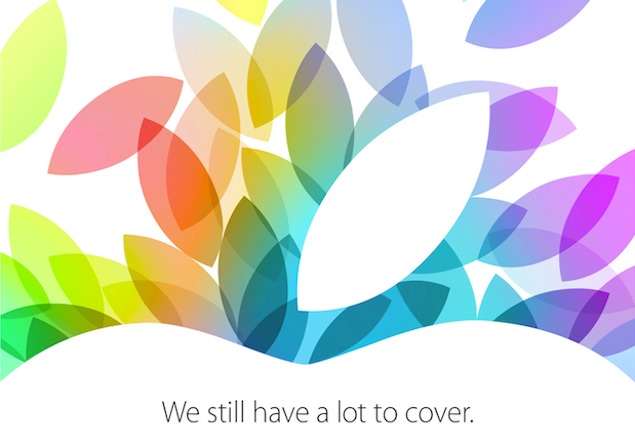 iPad mini second-generation and iPad fifth-generation are expected to make their debut at a media event that Apple is hosting at Yerba Buena Center for the Arts in San Francisco starting 10:00 AM Pacific Time (10:30 PM India Time, 1:00 PM EST, 6:00 PM in London) on Tuesday.

The iPad mini's expected to also get an upgrade, though there have been conflicting reports on whether it will sport a high-resolution Retina display. However, recent reports suggest that Apple's likely to include a Retina display.

Apple is also expected to announce a refresh for its MacBook Pro and Retina MacBook Pro laptops, updating them with a new Haswell chip (fourth-generation Intel Core processor), faster 802.11ac Wi-Fi and an improved front camera. The Cupertino giant is also expected to announce the availability details of its new Mac Pro systems, that it teased at the WWDC event in June, and an upgraded Mac Mini.

The public availability of Apple's OS X Mavericks OS is also expected this week, and it's possible that the company starts seeding it after the event.

The OS brings new features like Finder Tabs; Tags; enhanced multiple display support; updated native apps like Maps, iBooks, and Safari browser; and iCloud keychain, among others. It also brings under the hood changes for faster performance and longer battery life, including Timer Coalescing that groups low-level operations together so that the processor doesn't use more power and battery is conserved, App Nap that saves power while working on multiple apps by slowing down the apps that are in the background, and compressed memory that frees up memory space for faster performance.

Apple's also expected to release new versions of its iWork productivity suite for Mac and iOS, and perhaps the iLife suite of apps which includes iPhoto, iMovie and GarageBand.

While an Apple TV refresh was also rumoured, it's not clear if Apple would also refresh its Internet media player. We've also not heard any new rumours related to an iPod touch refresh.
Comments