That's it from the Apple event. Thanks a lot for reading this live blog. Good night.

He invites the people at the event to try the new gadgets.

He thanks Apple employees for their work. He says some of the products announced were multi-year projects.

This is our vision for personal technology. And we are just getting started, Cook says.

He's talking about how you need different gadgets for different purposes and how Apple products are the best for each purpose.

This is the strongest lineup of products that Apple has ever had, Cook says.

Tim Cook is back on stage.

The Retina iMac also has Thunderbolt 2 for faster I/O.

There's a video showing off the iMac's ultra high-resolution display.

Schiller is talking up the engineering accomplishments it took to make such a high-resolution display at this size.

14.7 million pixels on one display. It is the world's highest resolution display: Schiller.

The Retina Display is coming to the iMac!

Moving on to the Mac.

iPad Air 2 is available in silver, gold and space grey.

Schiller says apps that would have needed highest end desktop computers can now be run on the iPad Air 2.

Schiller is back on stage.

4 times faster rendering on the A8X than the A7 processor: Boudier

What we're seeing is how fast the iPad Air 2 can edit videos. This may not happen as fast on older iPad models.

Jeff Boudier from the Replay app team is now on stage.

This appears to be heavy photo editing that's being done almost instantaneously.

They just showed off a repair tool, which removes objects from photos.

Aidas Dailide from the Pixelmator team is now on stage. They're third-party app developers. Pixelmator is a photo editing app.

The front camera is also better, according to Schiller.

You can do slo-mo videos on the iPad: Schiller. He shows it off with a video of a long jump athlete.

Schiller is showing off photos taken from the iPad Air 2.

iPad Air 2's display doesn't have an air gap between the display and the touchscreen. This reduces internal reflection, Schiller says.

Phil Schiller is on stage now.

The iPad Air 2 has a silver ring around the home button - it's a fingerprint sensor.

A video is playing now. It shows the new iPad - iPad Air 2 - being slimmer than a pencil.

Cook asks, What do you do when you make the best tablet in the world? How do you make it better?

iPad Air is #1 in customer sat, it's #1 in usage and education: Cook

The graph shows that more units of the iPad have been sold than PCs by any manufacturer over the past year.

Over 225 million iPads sold around the world since the first iPad launch in 2010: Cook

Tim Cook returns, with an announcement about the iPad.

OS X Yosemite is releasing on the Mac App Store for free today.

The hilarious presentation is over. Back to the actual announcements.

You can control presentations on the Mac straight from the Apple Watch.

He's using those rumours to demo Continuity. He's made a funny presentation about Apple tightening secrecy and cutting down on leaks.

Federighi is making fun of the several Apple rumours we hear every day.

Federighi has spent the past few minutes talking about new features in Safari for OS X Yosemite.

He's reviewing all the new features in OS X Yosemite that Apple had announced during WWDC in June.

Your photo edits will be visible across Apple devices with iCloud Photo Library.

The iCloud Photo Library public beta will be rolled out with iOS 8.1: Federighi

He says a flood of apps written in Swift are already in the iOS App Store.

He spoke about new widgets, extensions and HealthKit. Apple had glossed over iOS 8 features during the iPhone event. Not the case here.

He compares it with Android, where only 25% of users are on KitKat and 54% are still on Jelly Bean.

This is our strongest product lineup: Cook

On to Apple Watch.

Apple Pay is US-only as of now.

This is our biggest iPhone launch ever: Cook

Tim Cook is talking up the launch of the iPhone 6 and iPhone 6 Plus in China.

These iPhones have become the fastest selling iPhones in history: Cook

Lots of people happy after buying the new iPhones seen in the video.

The video shows several people at Apple stores, trying the iPhone 6 and iPhone 6 Plus.

And the event has begun with a video.

New iMacs are also likely to make an appearance at the Apple event. We'll be covering it live right here, so stay put.

Apart from the iPad Air 2 and iPad mini 3 names, a leaked user guide also 'confirmed' the presence of Touch ID fingerprint sensor in the new tablets.

The new tablets from Apple are expected to ship with iOS 8.1. Apple might also announce the release date of iOS 8.1 during the event.

iPad Air 2 and iPad mini 3 are expected to be the stars of the Apple special event.

Welcome to our live blog of the Apple event that is going to be taking place in Town Hall Theatre in Cupertino, California.

iPad Air 2 and iPad mini 3 are expected to be the stars of the Apple special event at Town Hall Theatre in Cupertino on Thursday. The tablets were accidentally outed by Apple on Wednesday, when an iOS 8.1 user guide made an unexpected appearance on the iBooks store.

Apart from the iPad Air 2 and iPad mini 3 names, the user guide also 'confirmed' the presence of Touch ID fingerprint sensor in the new tablets. This feature has so far only been present on Apple's iPhone 5s, iPhone 6 and iPhone 6 Plus.

The new tablets from Apple are expected to ship with iOS 8.1, so we are also likely to seen an announcement on the release date of iOS 8.1 software update.

While there's nothing official about the specifications yet, the iPad Air 2 is tipped to feature an Apple A8X processor, 2GB of RAM, a Touch ID sensor, and also come in a new gold colour variant. Other than the Touch ID fingerprint sensor, the iPad mini 3 is being tipped to feature the Apple A8 processor found on the iPhone 6 and iPhone 6 Plus. The new iPad mini is also expected to come with same 7.9-inch display and resolution of 2048x1536 pixels as its predecessor. We reiterate, there's nothing official about these specs, and this may well change at launch.

New Macintosh computers, specifically new iMacs, are also likely to make an appearance at the Apple event on Thursday. The Cupertino-based company is also expected to announce a release date for OS X Yosemite, the next generation operating system for its computers.

Apple may also formally kick-off the Apple Pay payment system that it unveiled at the iPhone 6 and iPhone 6 Plus launch event back in September. 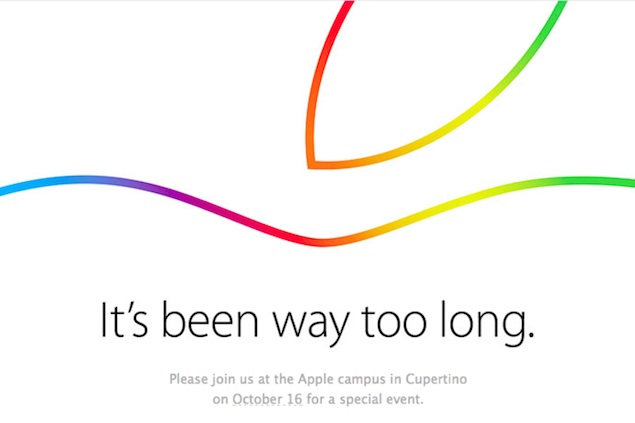