Apple on Tuesday at its education-focused event in Chicago launched a new entry-level 9.7-inch iPad, what is being called the iPad (2018). Priced the same as the previous budget model, it also supports the Apple Pencil stylus that was first introduced with the iPad Pro in 2015. The move by Apple is the Cupertino giant's attempt to take on Google and its massive presence in the US education market, which is dominated by Chromebooks as well as budget Windows laptops. Alongside the launch of the iPad (2018), the company launched new versions of its Keynote, Numbers, and Pages apps, part of its iWork productivity suite, all of which now support the Apple Pencil. At the same event, Apple also announced education programmes, such as the Everyone Can Create curriculum.

As for availability, the iPad (2018) is available for order from today, March 27 and will hit stores later this week in more than 25 countries, namely, Australia, Austria, Belgium, Canada, China, Czech Republic, Denmark, Finland, France, Germany, Hong Kong, Hungary, Ireland, Italy, Japan, Luxembourg, Netherlands, New Zealand, Norway, Poland, Portugal, Singapore, Spain, Sweden, Switzerland, UAE, the UK, and the US. India, Russia, Thailand, Turkey, and other countries and regions will follow in April, with South Korea and other countries and regions following in May. 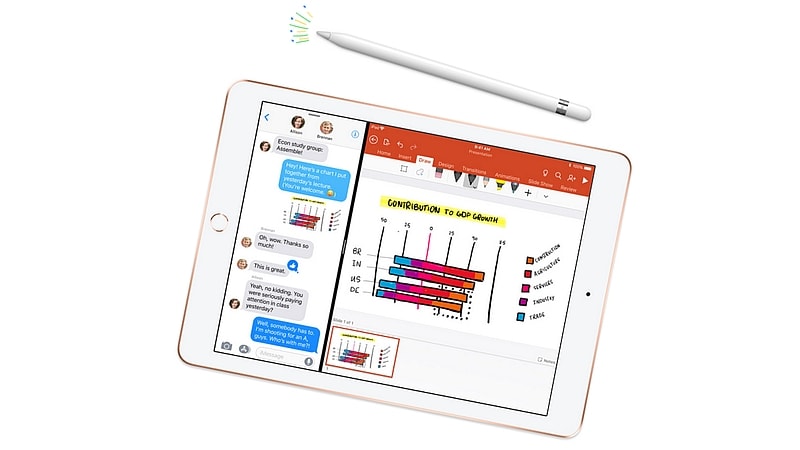 The iPad (2018) is essentially the same as the iPad (2017), which was launched almost exactly a year ago. The biggest difference is that it runs on the Apple A10 Fusion SoC - a significant upgrade over the Apple A9 SoC. To refresh other specifications, the iPad (2018) has a 9.7-inch Retina (2048x1536 pixels) IPS display with a pixel density of 264ppi and as we mentioned, support for the Apple Pencil is the addition on the display front. As before, RAM and battery specifications have not been detailed by Apple.

The iPad (2018) bears an 8-megapixel rear camera with an f/2.4 aperture and a 1.2-megapixel FaceTime HD camera with an f/2.2 aperture on the front. Connectivity options include 4G LTE (on the Wi-Fi + Cellular model), Wi-Fi 802.11ac (dual-band, 2.4GHz and 5GHz), Bluetooth v4.2, and A-GPS (on the Wi-Fi + Cellular model). Sensors on board include the Touch ID fingerprint sensor on the Home Button, apart from an accelerometer, ambient light sensor, barometer, digital compass, and a 3-axis gyroscope.

Now, let's get back to the new versions of the iWork - users can now add drawings to Keynote, Pages, and Numbers, and a Smart Annotation feature has also been added to Pages. At the event, Apple also announced the ability to create digital books will be available soon inside Pages on the iPad, helping teachers create books for their students - this will be coming soon to Pages on iOS, macOS, and iCloud.com. All three of these iWork apps will be preloaded for free on the new iPad model. The company also announced new versions of GarageBand and Clips, with the former gaining a kids-focused sound pack, and the latter getting filters and posters meant for kids.

As for the new Everyone Can Create curriculum, Apple says it has been designed to make it "fun and easy for teachers to integrate drawing, music, filmmaking or photography into their existing lesson plans for any subject." In its press statement, Apple said, "Beginning later this spring, Apple Stores will begin teaching Everyone Can Create as part of their regular Today at Apple sessions for educators. Apple's 501 stores in 21 countries have already taught nearly 5,000 hands-on Teacher Tuesday sessions on topics including coding and app design, movie and music creation, and presentations or spreadsheets."

Apple also announced a brand new app for teachers called Schoolwork, which helps them create assignments and also see student progress. Alongside, the Classroom app, formerly only on iOS, will make its way to macOS. Finally, Apple also announced that teachers and students with Managed Apple IDs will get access to 200GB of free iCloud storage, up from 5GB.