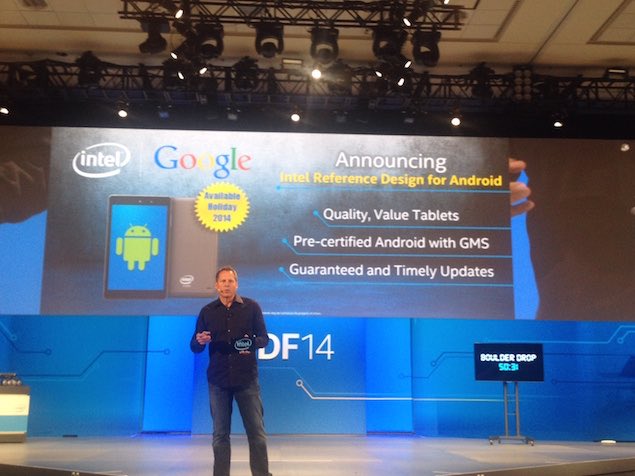 Intel unveiled a new reference design Android tablet at its annual developers conference in San Francisco on Tuesday in an attempt to attract a fresh group of OEMs to its platform. The world's largest semiconductors company, which has struggled so far in its attempts to make a major dent in the mobile devices market, is wooing partners with the promise of faster time-to-market and other sops like timely Android updates.

Intel says it will provide a single binary image for Android that will let OEMs build a system using a pre-qualified set of components or a complete BOM specification. That's pretty standard as far as reference design platforms go, but Intel is also committing to significant improvements on the software side by promising OEMs that it will make updates available downstream with 2 weeks of changes to the Android Open Source Project (AOSP).

Of course, that doesn't mean consumers will get updates to their devices within 2 weeks of Google releasing new Android versions - OEMs need time to account for their own customisations and testing before shipping it to consumers - but it should remove one of the biggest bottlenecks in the Android update process. A major problem in the past has been platform owners not shipping updates to OEMs in a timely manner, and Intel's move should address that concern for anyone looking to partner with the company.

"It's exciting to see Intel bring their years of expertise in reference designs to Android in order provide high-quality Android tablets and speed up time-to-market for manufacturers," said Hiroshi Lockheimer, VP of Engineering for Android, Google. "The result of this program will be devices powered by Intel's technologies, together with an operating system that is up-to-date and includes popular apps from Google such as Chrome, Maps and YouTube, offering a great overall user experience."