Asus has not officially confirmed any such device, but it might unveil the tablet at the Mobile World Conference, which starts next week. It would be interesting to see an Intel-powered tablet for the first time. 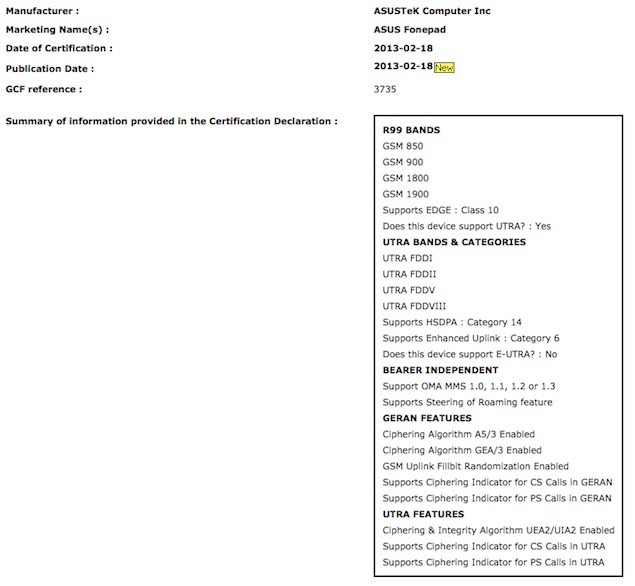 A few days back, images of the back of the purported tablet, complete with the Intel branding, surfaced online.  A report by Digitimes had claimed that the Asus Fonepad(ME371MG) will come with an Intel Atom Z2420 processor, which is tipped to clock at 1.2GHz clock speed. It is likely to run Android 4.1 (Jelly Bean). It is expected that the 7-inch LCD display of the device will support a display resolution of 1280x800 pixels and come with an IPS panel. PhoneArena via tablet.bg had also reported that this tablet will have an aluminium body and come with 4,270mAh battery, lasting 9.5 hours of continuous use.

Digitimes had also claimed that the Asus tablet will have 1GB of RAM on-board, 16GB of internal storage, a 3-megapixel rear camera, and support for 3G, Wi-Fi, Bluetooth and GPS. Furthermore, the tablet is expected to be priced around NT$8,000-9,000 ($271-305). This tablet is rumoured to start shipping from the second quarter of 2013.

It is noteworthy, that Asus also manufactures the Google Nexus 7 tablet. The 16GB version of this tablet is currently available for $199. The Nexus 7 is powered by Nvidia Tegra 3 processor, which clocks at 1.3 GHz. This tablet also has 7-inch IPS display with a resolution of 1280x800 pixels. It has 1GB of RAM and 4,325 mAh battery. At the time of launch, Nexus 7 came with Android 4.1 but it has now got an update to Android 4.2 (Jelly Bean).
Comments