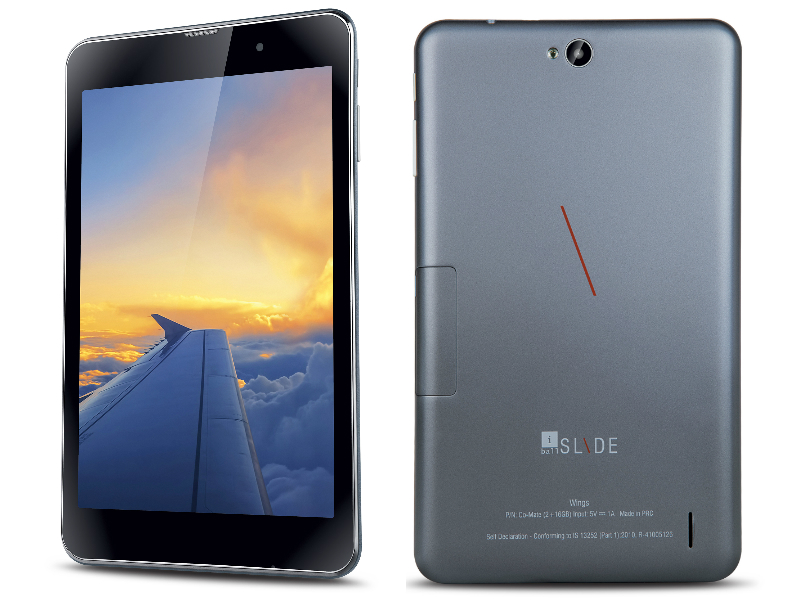 After the iBall Slide Bio-Mate, the company has released yet another tablet in its Slide-series - the iBall Slide Wings. iBall says the voice-calling tablet will be available in all leading retail outlets with a price tag of Rs. 7,999.

As for the specifications, the Android 5.1 Lollipop-based iBall Slide Wings supports dual-SIM dual standby (Regular+Micro), and features an 8-inch IPS HD (1280x800 pixels) resolution display with 189ppi pixel density. The tablet runs on 1.3GHz quad-core ARM Cortex-A7 processor with Mali 400 MP GPU and 2GB of RAM. It offers 16GB inbuilt storage with the option to expand via microSD card (up to 32GB).

On the camera front, the iBall Slide Wings has a 5-megapixel autofocus camera with LED flash. It comes pre-loaded with features like Face beauty, Live Photo, Multi-angle Panorama, Face Detection and Smile Shot. It also has a 2-megapixel selfie camera on board. It packs a 4300mAh Li-Polymer battery, which is rated to deliver up 14 hours of talk-time on 3G networks, and provide continuous video playback up to 4.5 hours . Connectivity options include Wi-Fi 802.11 b/g/n, Bluetooth v4.0, GPS, and 3G support. This tablet does not support 4G.

The iBall Slide Wings sports a multi-lingual keyboard with system support for 9 Indian regional languages, and read and write support for 21 Indian regional languages. Pre-loaded apps include Facebook, WhatsApp, Hungama, Times of India, Hungama Play; and games like Asphalt Nitro, Danger Dash and Spider-Ultimate Power. The tablet has been launched in a Dark Grey colour option.