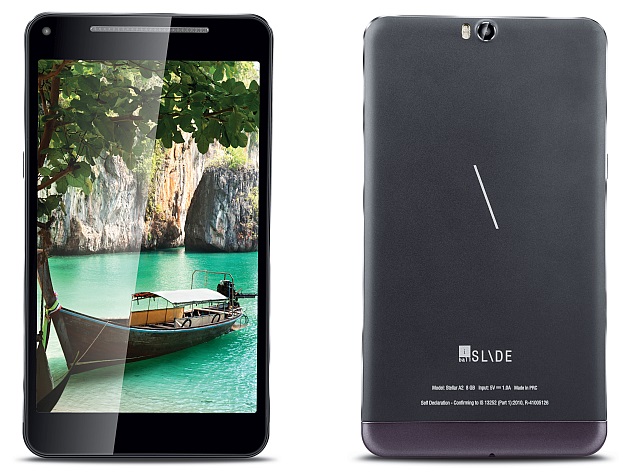 iBall has launched a new voice-calling tablet, the Slide Stellar A2, priced at Rs. 11,999. The new tablet will be available to buy via online and offline stores across the country.

The Android 4.4 KitKat-based Slide Stellar A2 tablet features a 7-inch display with a screen resolution of 1280x800 pixels and offers a pixel density of 215ppi. The tablet is backed by a 1.7GHz octa-core processor coupled with 1GB of RAM. There is 8GB of built-in storage, which is further expandable via microSD card (up to 32GB). The tablet also features HotKnot file transfer technology, which is similar to near field communications (NFC) in terms of application.

It packs a 3000mAh battery with no word on talk time and standby time. The Slide Stellar A2 supports 3G network while other connectivity options include Bluetooth, Micro-USB, and Mini HDMI port. It also supports USB OTG.

The dual-SIM based Slide Stellar A2 tablet supports voice calling with earphones.

Commenting on the launch, Sandeep Parasrampuria, Director iBall said, "Stellar A2 is for those who need exceptional performance with extremely powerful features. The product is outstanding not only in its looks, but equally appealing in its specifications. We are also delighted to present the India's first Tablet with 8MP front camera for selfie addicts."