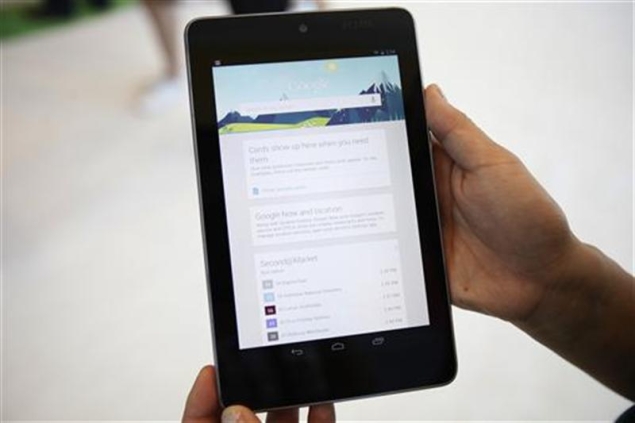 Google Inc launched its Nexus 7 tablet in Japan, as well as local language movies and books, in what has rapidly become one of its biggest global markets for digital downloads.

Japan is the first country in Asia outside Australia to sell the 16-gigabyte device, which went on sale online Tuesday for 19,800 yen and will be available in retail stores on October 2. The device is already available in France, Germany, Spain, Canada, the UK and the United States, according to Google.

Japan has rapidly embraced the smartphone, with devices running Google's Android operating system tripling in the past year, according to Google. Google said that Japan now ranks third in terms of downloaded applications from its Play store.

Google makes most of its money from advertising and with the rise of mobile users, is seeing increasing traffic to its YouTube video website. In Japan and South Korea, more than half of YouTube downloads are from mobile devices, some of the highest ratios in the world.

Google's executive chairman, Eric Schmidt, attended the launch and later told a briefing that growth in the smartphone market would lead to a boom in new startup companies in Japan focused on shopping.

While Google has long lagged Yahoo Japan in the domestic search market, in launching the tablet and downloadable content, it has stolen a march on Amazon.com Inc , which has yet to launch its own Kindle in Japan. Local player Rakuten Inc launched its own e-reader device, the Kobo, in July.

The primary challenge has been persuading local content providers to share content. Google said that in addition to the movies for rent it has offered Japanese consumers, it would for the first time sell movies from Sony Corp and Paramount.

In addition, Google will begin providing Japanese-language book titles on Google Play. The Android system allows users to read the same titles and pick up where they lift off on another device.

The global tablet market is dominated by Apple Inc and its iPad, which represented about 70 percent of global sales in the second quarter, and also includes Barnes & Noble Inc's Nook and Samsung Electronic's Galaxy Tab.