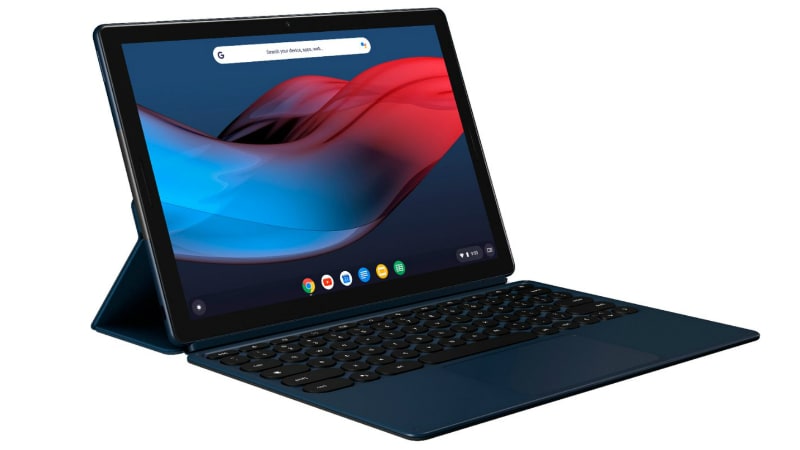 Google Pixel Slate has been spotted in yet another leaked render just ahead of the Google October 9 hardware event to be held in New York, USA. This will be the tech giant’s first Chrome OS-based tablet, as per previous reports. The renders have up till now showed off the presence of stereo speakers, a USB Type-C port, and no 3.5mm headphone jack. We have also seen a detachable keyboard, and this new leak gives us a closer look at the full setup just hours before the Google Pixel event scheduled for 11am EDT (8:30pm IST) on October 9.

Reputed tipster Evan Blass, who goes by the moniker @evleaks on Twitter, has posted a leaked press render of the upcoming Google Pixel Slate with a keyboard attached to the device. The display in this leaked image shows a UI similar to the one seen on previously leaked renders.

The earlier leak also showed off a Blue-coloured Pixel Pen, a display with a 3:2 aspect ratio, single rear and selfie cameras, a USB Type-C port on one side, and stereo speakers on both sides of the tablet. A blue-coloured detachable keyboard was also shown off in the leak, with circular keys.

Interestingly enough, a report from earlier this month had claimed that the Google Pixel Slate tablet would be able to dual-boot Windows 10 for users who prefer to use Microsoft’s operating system on the Google tablet. It is expected to pass Windows Hardware Certification Kit soon.

At its Made by Google event on Tuesday, Google is expected to unveil its Pixel 3 and Pixel 3 XL range of smartphones, a wireless charging dock called Pixel Stand, the Google Home Hub, and the Pixel Slate in terms of hardware. Stay tuned to Gadgets 360 for extensive coverage around the Google launch event.