E-book wars: The specialist vs the multitasker 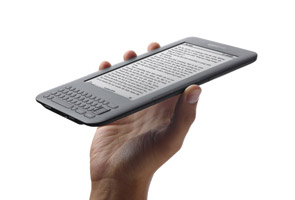 Highlights
The Kindle from Amazon.com is designed to let us do one thing very well: read. To survive, it must excel at this, not only by jostling to stay a nose ahead of other e-readers, but also by maintaining an enormous lead over the Apple iPad and its coming competitors. The multipurpose iPad can do thousands of things very well; used for reading book-length texts, it doesn't excel, but it's passable.

Last month, Amazon introduced a pair of third-generation machines -- smaller, lighter and with crisper text. One has a new, lower entry price of $139. "I predict there will be a 10th-generation and a 20th-generation Kindle," said Jeffrey P Bezos, Amazon's chief executive. If that sounds a tad defensive, it's probably because of the instant success of the multipurpose iPad: 3.3 million units sold since its introduction in April.

We know how many iPads were sold because Apple is straightforward about reporting the unit sales of all of its products. Amazon is a different story. We don't know the size of Amazon's Kindle business because the company is averse to disclosing details of its operations. When it reports its financial results, the company that sells just about anything that can be put in a box or sent electronically divides its businesses into just three categories: "media," which lumps books, music and videos into one indistinguishable agglomeration; "electronics and other general merchandise," an even larger, indistinguishable agglomeration; and "other."

"The key numbers are a black box," says Colin W Gillis, director of research at BGC Financial. "Apple told us when they sold one million iPads," he said, "and Apple breaks out every quarter how many are sold for all of their products." Why, he asks beseechingly, doesn't Amazon do the same for the Kindle? "Come on, if you're proud of it, just tell us how many you sold!"

Amazon calls the Kindle a "purpose-built device," leaving room for ancillary uses but preserving the idea that it has one central purpose. It's much lighter than the iPad -- not a small consideration when reading for any length of time. Wherever there's sunlight, the Kindle's text is easier on the eyes. And its battery life is measured in weeks, not hours.

Amazon could bring color to the Kindle -- there is a color version of the E-Ink display technology it uses -- but adding it would lower resolution or diminish the reading experience in other ways. "For most of the books that people read, black-and-white is a feature, not a bug," said Russ Grandinetti, Amazon's vice president for Kindle content.

It's not surprising that a "purpose-built device" does a better job at its one task. The question is whether some years down the road -- say, in the 2020 holiday season -- customers will still be willing to buy single-purpose devices in addition to irresistible multipurpose ones. Mr Grandinetti points to running shoes for the answer. "If I'm going on a 10-mile run," he says, "I want a really well-designed pair of running shoes instead of Converse high-tops."

Another example is cameras. "As good as the technology in my phone camera is, when my son has his third birthday party, I'll use my 35mm SLR," Mr Grandinetti said.

If Kindles offer such a vastly superior reading experience over iPads, however, we wouldn't expect to hear the following about some people who own both, "Early evidence suggests some Kindle owners are buying iPads and beginning to shift a portion of eBook purchases to Apple's iBookstore," writes Marianne Wolk, an analyst at the Susquehanna International Group, in a report to clients at the end of June.

She says iPad users "are buying a lot more books than we expected, with five million e-book downloads in the first 65 days, roughly 2.5 per device," comparable to the estimate of three books per Kindle for the quarter. The iBookstore from Apple competes against Amazon's Kindle store without undercutting Amazon's prices. (The uniformity of e-book prices at Amazon and Apple on many of the most popular e-books has drawn the attention of Richard Blumenthal, attorney general of Connecticut, who said last week that his office had started an investigation into their agreements with major e-book publishers that "threaten to encourage coordinated pricing and discourage discounting.")

When the Kindle was introduced in late 2007, it was priced at $399. Does its new entry-level price of $139 reflect a decision to forgo profits on the hardware to bolster sales at its Kindle store? Nothing of the sort, Amazon says.

"We believe each of those two businesses should stand on its own," Mr Grandinetti says. E-book buyers do not have to own a Kindle to read a Kindle e-book: his company is device-agnostic and supplies free software for reading Kindle e-books on iPads, iPhones, Macs, PCs, BlackBerrys and Android devices.

Analysts have wondered what profit margins Amazon makes on its Kindle hardware business. "It is difficult to say Amazon is making much money at its new device prices of $139," says Ms Wolk.

Barnes & Noble's e-reader, the Nook, and Sony's Reader both start at about $149.

Many people thought that the Kindle's price must drop below $100 to excite the hesitant buyer. But consumers aren't waiting for that deal. The two new Kindle models, which are to start shipping on Aug. 27, are already back-ordered, and orders submitted today will be shipped still later.

This doesn't settle the long-term question of Kindle's mass-market appeal amid multipurpose tablets, which will become lighter and less expensive. Sure, Amazon can talk of a future 20th-generation Kindle. But unless it's brave enough to reveal Kindle's actual sales numbers, it sounds as if it's whistling past the graveyard. Dedicated word processors, purpose-built machines of the 1970s, had a good run of about 10 years.
Comments