All tablets feature a 7-inch screen with 800x480 pixel resolution and run on Android 4.0.3. while the UbiSlate 7Ri and UbiSlate 7R have resistive screens, UbiSlate 7Ci and UbiSlate 7C+ come with capacitive screens. All tablets are powered by a Cortex A8, 1 GHz processor with 512MB RAM. They also come with a front VGA camera and 4 GB of internal storage, which can be expanded by another 32GB via a microSD slot.

The UbiSlate 7R+ and 7C+ are SIM-enabled tablets that can be used for making calls in addition to the other features. Both these tablets feature a 3200mAh battery promising 3-4 hours of backup.

All new tablets in the series claim to be lighter in weight and support features like Internet access and multimedia entertainment. In India the devices will offer unlimited web-browsing for under Rs.100/month on traditional mobile networks, though no additional details on the operators involved or how the company plans to offer this are available at this point in time. The tablets also feature the Ubisurfer-browser that claims to compress data up to 30x, resulting in faster surfing and reduced data usage. Further, while HD video playback seems like a possibility, there is no mention of an HDMI port to shift to a bigger screen.

The new tablets also come with pre-installed apps like TestBag, a comprehensive solution for testing and e-assessment, Intelligaia finger tracing apps to teach alphabet letter writing for toddlers, The Indian Express, Yahoo! India amongst others.

This is not the first time Datawind has launched budget Android tablets. The company made its foray into the tablet arena with the launch of the UbiSlate 7 and UbiSlate 7C tablets back in April this year. The devices were priced in the Rs. 3,000-4,000 range. They were also updated to include multi-language support for all major regional Indian and world languages. However, they still haven't reached the consumers.

Though individual pricing of the new UbiSlate offerings has not been revealed, it is known that they will be all available in a price range of Rs. 2,999 to Rs. 4,499. 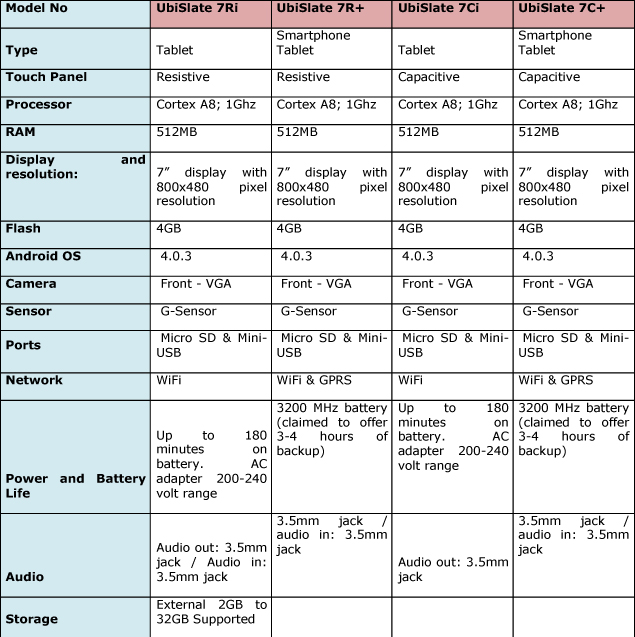