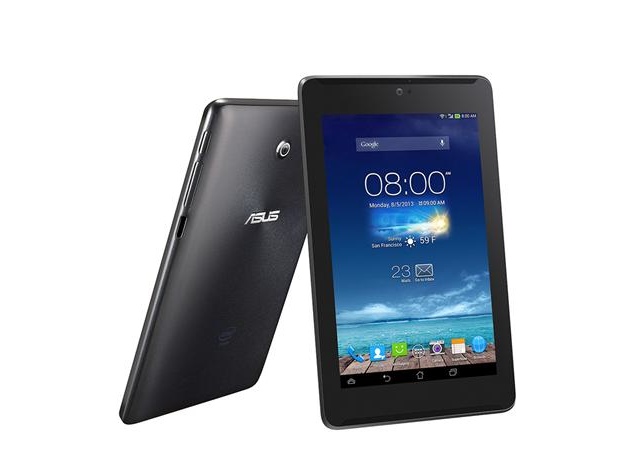 Asus has launched the new version of its Fonepad 7 tablet in India for Rs. 17,499. The tablet, which also comes with voice calling support, will be available starting November.

The new Fonepad 7 was initially announced in September at IFA 2013, Berlin.

The new Asus Fonepad 7 is powered by a dual-core 1.6GHz Intel Atom Z2560 processor alongside 1GB of RAM but retains the same 7-inch 1280x800 display. It comes with dual-front speakers with Asus SonicMaster audio technology.

The new Fonepad 7 is 10.5mm thick and weighs 340g. It packs in a 1.2-megapixel front facing camera, and a 5-megapixel autofocus rear camera with a 100 continuous-shot 'burst' mode and 1080p full-HD video recording, which is a big improvement over its predecessor with the same name.

The new Asus voice-calling tablet comes with a 3950mAh battery that is rated at up to 28 hours of 3G talk time, 35 days of standby time and up to 10 hours of video playback.

Asus Fonepad 7 will be available in 16GB  onboard storage options and a microSDHC card slot for expansion. The tablet comes with 5GB of Asus WebStorage free for lifetime as well the Asus WebStorage Office suite of apps.

Connectivity options include Wi-Fi and built-in 3G with HSPA+ mobile data with download speeds up to 42Mbps and uploads of 5.76Mbps. Fonepad 7 can also be used for voice calls using the built-in noise-cancelling digital microphone or an optional Bluetooth headset.

Asus Fonepad 7 runs Android 4.2 Jelly Bean and comes with some custom apps like SuperNote app for drafting notes and the Floating App that helps users multi-task by giving them the option to open up to six apps simultaneously onscreen.

At its price, the Asus Fonepad 7 competes directly with the Micromax Canvas Tab P650 and the Samsung Galaxy Note 3 211.
Comments