Apple to unveil mini-iPad to take on Amazon, Google 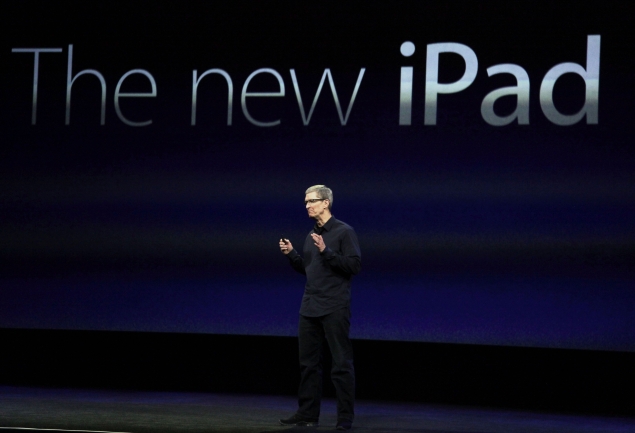 Apple Inc is expected to make its biggest product move on Tuesday since debuting the iPad two years ago, launching a smaller, cheaper tablet into a market staked out by Amazon.com Inc and Google Inc.

Apple hopes to beat back their charge onto its home turf of consumer electronics hardware, while safeguarding its lead in the larger 10-inch tablet space that even deep-pocketed rivals like Samsung Electronics have found tough to penetrate.

Amazon's Kindle and Google's Nexus 7 have grabbed a chunk of the lower end of the tablet market and proved demand for a pocket-sized slate exists, helping force Apple into a space it has avoided and at times derided, analysts say.

A smaller tablet would mark the first device to be added to Apple's compact portfolio under Chief Executive Tim Cook, who took over from co-founder Steve Jobs just before his death.

"Apple sensed early that they had a real winner with the iPad and that has proven to be correct," said Lars Albright, co-founder of mobile advertising startup SessionM and a former Apple ad executive.

"They have a large market share, and to protect that market share they have got to be innovative," he said.

Apple's invitation-only event, where it is expected to unveil the tablet, gets underway at 10 am PT (1700 GMT) in San Jose.

Wall Street analysts have said for months that Apple was planning a less expensive version of the iPad to take on cheaper competing devices, a move they say might hurt its margins, but prevent its rivals from dominating an increasingly important segment.

The chief rival is Amazon, which proved a 7-inch tablet at around $200 has consumer appeal. The Kindle Fire, released last year for $199, was one of the hottest-selling holiday gadgets. It pressured Amazon's margins but gave it potentially millions of new high-spending customers.

Amazon sold more than a million Kindles a week during December, paving the way for others like Google with its Nexus 7 to try and beat Apple in a market the company created.

The Internet retailer has now put its second-generation Kindle Fire HD in the market, which it says is the "best-selling product across all of Amazon worldwide", based on undisclosed U.S sales figures and international preorders.

All three companies will be vying to get their devices on shopping lists during the U.S. holiday season, which traditionally starts next month.

"It's going to be the go-to holiday gift," said Michael Yoshikami, founder of Destination Wealth Management, which owns Apple shares.

Jobs famously derided the 7-inch screen, saying such a device should come with sandpaper so users can file down their fingers. But an internal email revealed during a patent trial showed he turned more favorable to the idea by early 2011.

Apple has sold over 84 million iPads so far, with the device accounting for 26 percent of Apple's fiscal third quarter revenue. Most Wall Street analysts expect Apple's new tablet to fall between 7 inches and 8 inches in size, saying its price will be crucial to its success.

The "starting sweet spot" for the tablet would be in the $249-$299 range, according to a survey of over a thousand consumers by Baird Equity Research.

"When asked what the most they would pay for a smaller iPad was, our respondents on average said that they would pay $242 for a 7-inch iPad and $268 for an 8-inch iPad," William Power, Baird Equity Research analyst, said.

Any erosion in Apple's industry leading margins also hinges on the price tag. It earned gross margins of 23 percent to 32 percent on U.S. iPad sales between October 2010 and the end of March 2012, according to a July court filing by Apple.

Rivals haven't fared as well. Amazon's first Kindle Fire just about breaks even, according to IHS iSuppli estimates, and Google has said its Nexus 7 is being sold at cost.

Topeka Capital's Brian White argued a smaller tablet could overtake sales of the iPad in a few years. He is forecasting sales of 5 million to 7 million in the December quarter.

Apple shares rose 4 percent on Monday, buoying the benchmark S&P 500 index. While the stock is up 56 percent this year, it is currently down 10 percent from its record high of $705 on September 21, struck by concerns about iPhone-supply disruption at contract manufacturer, Foxconn Technology. Sharp criticism about errors in its Maps service also hurt.

"Apple's stock is up a ton and it is only logical that it will take a breather after a while," Yoshikami said. "I don't think there is any fundamental issue beyond that."