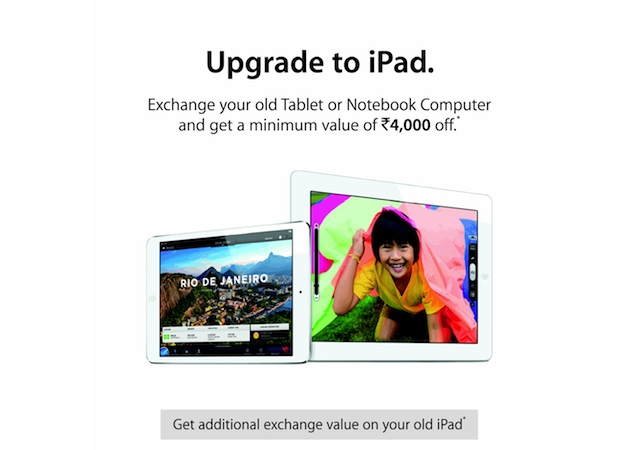 Apple has announced a new exchange offer for its iPad mini and iPad tablets in the Indian market in a bid to further increase its marketshare.

As per the offer, customers can bring their old tablet or notebook computer, and get a minimum discount of Rs. 4,000 on all models of iPad mini and on the 16GB variant of the iPad with Retina display (fourth generation iPad). There's a condition that if the customer is exchanging an old iPad, it has to be less than two years old. Customers can get a discount value higher than Rs. 4,000, depending upon the condition of your tablet at the discretion of the dealer. Apple published ads communicating the same in major National dailies during the weekend.

In case you don't have an existing tablet or notebook to exchange, you can utilise 10% cash back offers from Apple's online partners Flipkart and Homeshop18.com on the above-mentioned iPad models, though the offers do not seem to have gone live at this time. NDTV Gadgets has learnt that these offers should go live shortly.

It's worth pointing out that Apple was running a similar offer for the iPhone 4, offering a discount of up to Rs. 7,000 in exchange for the consumers' old smartphone. As per the conditions of the scheme, Rs. 5,000 was the cash back discount given and the additional Rs. 2,000 was the minimum resale value pegged for the old smartphone.

If the consumers tried to exchange a smartphone, that had a resale value of more than Rs. 2,000 then the effective cash back to them was Rs. 5,000 plus the value the resale of the phone. Initially, the scheme was launched for just 15 days. However, given the popularity the scheme was extended till May. After that, Apple has been running a scheme, where in students are eligible for Rs. 7,777 discount on purchase of the iPhone 4. Apart from this, the American Express card holders can get an additional 10 percent on purchasing this smartphone. It was also reported that sales of Apple iPhone in India have shot up by a whopping 400 percent after the offer.
Comments

Want to confess your sins? There's an app for that
Sony Cybershot DSC-WX300 review