While Apple announced iOS 12 with a plethora of improvements at WWDC 2018 on Monday, it has now been spotted that this new iOS version has some references that suggest the arrival of Face ID on iPad. The feature that recognises facial features using a dedicated technology setup was first launched on the iPhone X last year and was rumoured to make way to the iPad family in the past. With Face ID support, the new iPad models are likely to have an experience similar to the latest iPhone flagship. It will also abandon the use of Touch ID that uses fingerprints to unlock the device.

As spotted by iOS developer Guilherme Rambo, the first iOS 12 beta has a setup UI to enable Face ID on iPad. There is also the code within the new iOS version that appears to bring the same facial recognition support to iPad that has so far been exclusive to the iPhone X.

The initial references hidden under the iOS 12 beta aren't clear enough to confirm the arrival of Face ID on iPad. Instead of standalone Face ID support, there could be a feature that will enable iPhone X to unlock their iPad using their face. It might work similar to how a user can unlock a Mac device using an Apple Watch. It is also worth noting that the spotted setup UI has some references to an iPhone, though it is meant for iPad devices.

Having said that, the availability of the setup UI within the iOS 12 beta shows that Apple is planning something specific to the iPad family, and the new iPad models could have appropriate sensors to enable Face ID out of the box - without requiring iPhone X support. 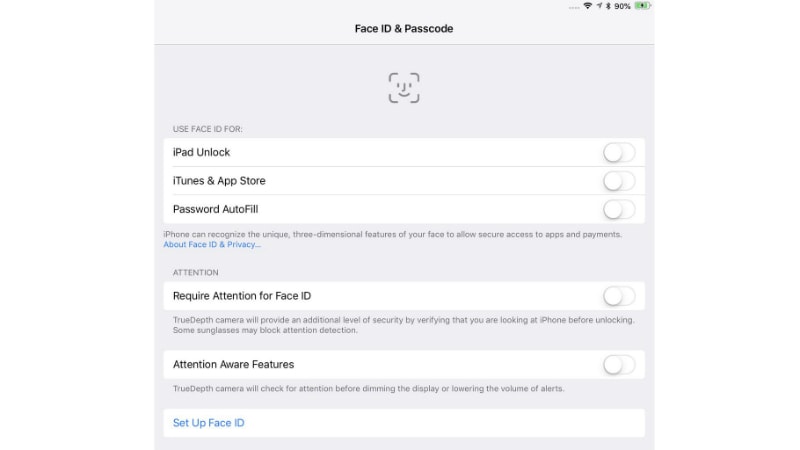 At the WWDC keynote, Apple already showcased that iOS 12 will bring similar gesture controls to iPad and iPhone X. The new software has also moved the clock from the top centre to the top left side. All this suggests that the company is ditching the Touch ID-equipped home button and making space for the notch that may have a TrueDepth Camera setup.

If we believe what former KGI Securities analyst Ming-Chi Kuo reported last year, Apple will unveil its new iPad Pro models with Face ID support sometime in 2018. The new development is said to be limited to the new iPad Pro lineup and would not come to regular iPad models at the initial stage. However, considering the recent expansion of the Apple Pencil - moving from the iPad Pro range to the affordable iPad models - Face ID could eventually available across the entire iPad family.