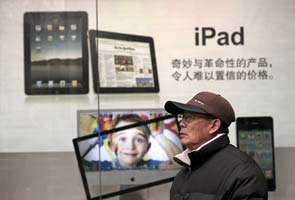 Apple has paid $60 million to settle a dispute in China over ownership of the iPad name, a court announced Monday, removing a potential obstacle to sales of the popular tablet computer in the key Chinese market.

Apple Inc. says it bought the global rights to the iPad name from Proview in 2009 but Chinese authorities say the rights in China were never transferred. A Chinese court ruled in December that Proview still owned the name in China. Proview, which is struggling financially, asked Chinese authorities to seize iPads in an apparent effort to pressure Apple to settle.

China is Apple's second-largest market after the United States and the source of much of the Cupertino, California-based company's sales growth.

Proview hoped for more money but felt pressure to settle because it needs to pay debts, said a lawyer for the company, Xie Xianghui. He said Proview sought as much as $400 million and might still be declared bankrupt in a separate legal proceeding despite the infusion of settlement money.

"This is a result that is acceptable to both sides," Xie said.

The dispute centered on whether Apple acquired the iPad name in China when it bought rights in various countries from a Proview affiliate in Taiwan for 35,000 British pounds ($55,000). The December court ruling said Proview, which registered the iPad trademark in China in 2001, was not bound by that sale, even though it was part of the same company.

The settlement should be good news for both Apple and its customers because it clears a potential obstacle for the company to start selling the new iPad 3 in China, said You Yunting, a lawyer for the DeBund Law Office in Shanghai.

"It is a good deal for Apple, because sales of iPads, which are in great demand, can compensate for this $60 million cost," You said.

Apple has yet to announce a China release date for the iPad 3 but the country's telecommunications equipment certification agency approved the tablet in May.

The case gave Chinese authorities a chance to show that their courts could impartially resolve intellectual property disputes but also raised the possibility that technology investors might be put off by a negative outcome for Apple. Chinese regulators said Proview clearly owned the mainland name rights under Chinese rules.

Without a formal ruling, it will be hard for companies to draw lessons about how Chinese courts will handle such disputes in the future, said Stan Abrams, an American lawyer who teaches intellectual property law at Beijing's Central University of Finance and Economics.

"It's such an atypical case," he said. "Certainly, the details and specifics of this kind of commercial dispute aren't going to give us any long-term lessons."

The outcome reflects Chinese courts' preference for encouraging adversaries in commercial disputes to settle instead of pushing for a ruling, Abrams said. He said the relatively small size of the settlement by Apple's standards suggested Proview gave in, possibly under pressure from either its creditors or the court.

All of Apple's iPads are made in China by Foxconn Technologies Group, which employs more than 1 million people in sprawling factories. Brazil's government says Taiwan-based Foxconn plans to open factories there to produce iPads and other products.

A Hong Kong court ruled in July that Proview and the Taiwan company both were "clearly under the control" of the same Taiwanese businessman, Yang Long-san, and had refused to take steps required to transfer the name under the agreement. The judge said the companies acted together "with the common intention of injuring Apple."

However, that judgment had no automatic force in the mainland case because Hong Kong, while Chinese territory, has a separate legal system.

Apple also ran into a trademark dispute before it launched the iPhone in 2007.

Cisco Systems Inc., the maker of networking hardware, had owned the trademark since 2000 and used it for a line of Internet-connected desk phones. After Cisco sued, the companies reached an undisclosed settlement and the phone launch went off as planned.

The dispute came amid complaints Beijing is failing to stamp out rampant unlicensed Chinese copying of goods ranging from music and Hollywood movies to designer clothing and pharmaceuticals.

But unlike "trademark squatters" who register names of products already sold abroad and then demand foreign companies pay for the Chinese rights, Proview registered the iPad name long before Apple planned its tablet computer.

"The only thing companies really should take form this case is, be careful when you do transactions, be careful with your contracts," Abrams said. "Be careful you're doing it the right way or you could pay a lot for your mistakes."