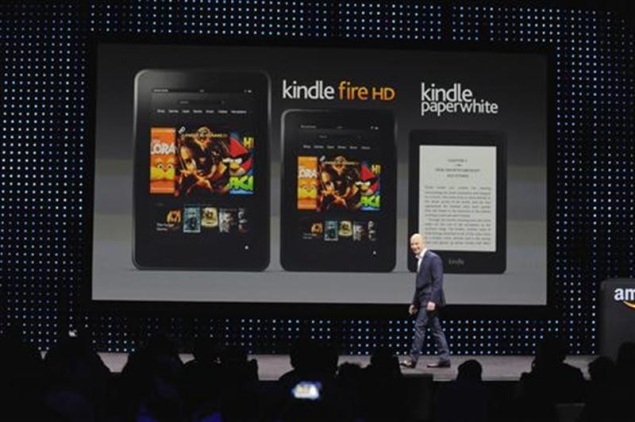 The world's largest Internet retailer lifted the lid on devices with price tags ranging from $159 to $599. The new tablets come with ads known as "special offers" that appear when screens are locked and in the corner of the home screen, helping Amazon keep prices low.

Last year, Amazon debuted a 7-inch tablet at roughly half the price of the $499 iPad. In just 10 months, it became the No. 2 tablet in the United States, after the iPad.

Amazon's expanding lineup also intensifies a battle with Google Inc and Microsoft Corp, who this year entered their own competitors in the booming tablet arena.

The latest aggressive pricing move, and Amazon's variety of gadgets, furthers its goal of getting Kindle tablets into the hands of as many buyers of its online content from games and books to video as possible.

Apple, by contrast, makes much of its profit from hardware sales. It sells a single-sized iPad often touted as best-in-breed, at costs ranging from $399 to $829, depending on storage capacity, screen resolution and wireless connectivity.

Amazon, which began as an Internet bookstore, will begin shipping on November 20 an 8.9-inch version with a high-definition screen, that works off either Wi-Fi or fourth-generation wireless broadband, known as 4G. The costliest version, at $599 for 64 gigabytes of storage, undercuts the top-of-the-line $829 iPad.

"Their first Kindle Fire tablet was a device that said 'See, we can tie all this together," but it wasn't a strong enough device," said Forrester Research analyst James McQuivey.

"Now they've really come ready to show that their device line-up is going to be as good as their service line-up. They're tying those two things together, and at a price that is very, very hard to compete with. It's going to push everybody's else's price buttons including Apple's."

The premium Kindle Fire HD has a 1920-by-1200 resolution screen, lagging Apple's so-called "retina" display. At 8.9 inches, it is also slightly smaller than the iPad's screen.

At the other end of the spectrum, the cheapest 7-inch WiFi-only Fire goes for $159. Apple's lowest iPad price tag is $499.

"Amazon is able to sell these products at or close to cost, while Apple has 40 to 50 percent gross profit margins and has always been very cautious with their product margins," said Scott Tilghman, an analyst at Caris & Company.

"As Amazon is able to upgrade their products and have competitive hardware it may become more worrisome for Apple," he added.

Global combat
Amazon competes with Apple, Google Inc and other technology companies in the booming market for mobile devices, fast becoming the preferred tools for consumers to access media over the Internet.

Apple is expected to unveil the iPhone 5 next week, and Microsoft and Nokia launched their powerful Windows phone on Wednesday. Some analysts also expect Apple to launch a smaller iPad Mini tablet this year to compete with the 7-inch Kindle Fire.

Amazon Chief Executive Jeff Bezos, taking the stage in Santa Monica, California, said the company wants to make money when people use its devices, not when they initially buy them.

While Bezos did not mention Apple by name during his presentation, the company compared its new tablets to the iPad several times in its press release describing the devices.

Amazon also showed a comparison of the Kindle Fire HD 32GB 4G tablet versus the iPad 3 wireless device on a big screen at the Santa Monica event. The purchase price, plus the data plan, came to a one-year cost of $549 for the Amazon tablet and $959 for the iPad.

Bezos also described the Kindle as a service, with hardware critical to its digital content business.

Amazon touted a $50 annual fee on 250 megabytes of data via AT&T Inc as the world's most-affordable tablet-wireless plan. While that would suffice for very light usage a user would not be able to download an entire movie heavier consumers would have to pay for more data.

Amazon said users will be able to upgrade to more expensive 3- and 5-gigabyte data plans directly from AT&T via the devices.

The new Kindle Fire HD tablets come with a front-facing camera, paired with a customized, pre-installed application from Skype that allows users to video chat for free, Amazon said.

The company also unveiled several new services to support the tablets, such as X-Ray for movies and Kindle FreeTime.

X-Ray allows users to look up information on actors in scenes without leaving the flick.

FreeTime is a new parental control system that lets parents set limits on how their kids use the tablets. For instance, a 30-minute limit can be put on games, while read time is unlimited.

New e-readers
Amazon also showed off its new family of "paperwhite" e-readers, with sharper screens and longer battery life. Like the Kindle Fire, they too will hit store shelves in time for the crucial holiday season.

The 3G wireless version that made digital readers mainstream will sell for $179 starting in October, in time for the crucial holiday season. A Wi-Fi-only version will go for $119, and the cheapest will carry a $69 price tag undercutting the cheapest Barnes and Noble Nook.