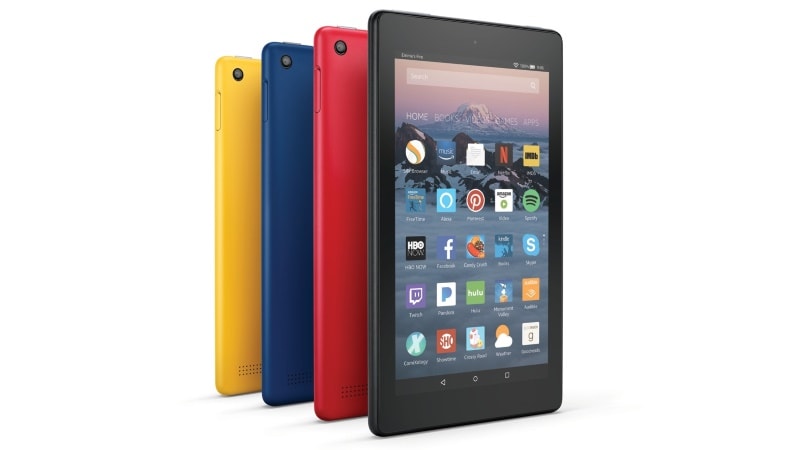 The company also announced a new version of the 7-inch Fire tablet, which will keep its $50 (roughly Rs. 3,220) price tag. It also introduced two new versions of its tablet for children - a $100 (roughly Rs. 6,440) update to its Fire 7 Kids Edition and brand new $130 (roughly Rs. 8,400) Fire HD 8 Kids Edition - and a limited promotion that will slice 20 percent off for anyone who buys at least three Fire devices at once.

(Amazon chief executive Jeffrey P. Bezos is the owner of The Washington Post.)

The price cut comes as Amazon and other manufacturers try to settle on the right price for a tablet. Apple recently dropped the price of its cheapest iPad to $330 (roughly Rs. 21,250) - far above what Amazon is offering - in an acknowledgment that people aren't as eager to update their tablets as they are their smartphones.

Amazon also seems to know that you aren't sure if you can justify buying a new tablet. It's trying to make them cheap enough that you might not care.

Tablets have become a tricky product for many gadget-makers to address, as enthusiasm for the devices continues to cool. In an industry obsessed with growth, tablets have been a particularly dark spot, with analysis firm IDC recently reporting that sales of tablets are currently down 8.5 percent from the same time in 2016.

Tablets saw incredible growth between 2010 and 2013, filling the need for a device as portable as a smartphone but still a bit more powerful. But now, large-screened smartphones and a surge in sales of detachable laptops - essentially, tablets with a keyboard - are growing and have many of the same selling points as tablets. For consumers looking for something on which they can watch video, shop or peruse comfortably while watching television, there are now more versatile options.

Shipments of Amazon tablets, IDC said, are currently down 8 percent from the same time last year.

So why bother? Gadgets are valuable to Amazon, because they make it much easier for people to buy things from the company. Independent analysts estimate that Kindle tablet and e-reader owners spend far more than non-Kindle owners on Amazon.com - up to 30 percent more, according to a report from the Consumer Intelligence Research Group. (Prime subscribers spend about twice as much.) As a sort of Trojan horse, then, Amazon devices are incredibly effective.

Even with slowing growth, IDC said that Amazon's strategy of dropping prices to sell its tablets is what's keeping it in the fight for the top-selling tablet manufacturers in the world.

"Regardless of the changing industry dynamics . . . Amazon seems poised to remain a competitor given its market strategy," IDC analysts said in the report.

Tablets also give company a way to get its newest software in front of consumers. Alexa, Amazon's voice assistant, is available on both the new, cheaper high-end tablet and Amazon's low-cost Fire. The Fire 7 also boasts a thinner and lighter design, eight hours of battery life and improved Wi-Fi connectivity. It starts with 8GB of storage that can be expanded to 256GB with an SD card; there is also a 16GB model. The Fire 8 HD has 12 hours of battery life and either 16GB or 32GB of storage that can also be expanded to 256GB.

The new tablets will ship June 7, Amazon said. The company did not say how long the 20 percent promotion would last.