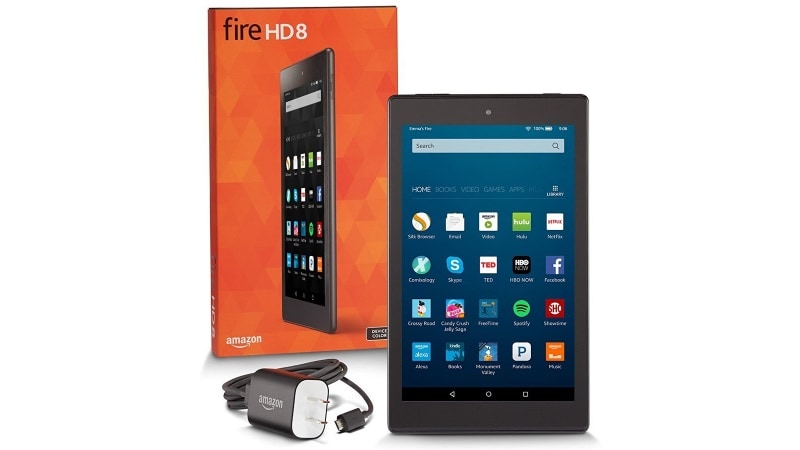 Amazon.com unveiled a cheaper, voice-assisted version of its Fire tablet in a continued push beyond its online retail business, even as the global market for tablets remains in a slump.

The new Fire HD 8, at a price of $89 (roughly Rs. 6,000), offers longer battery life, more storage and Alexa, which can provide weather reports, play music or turn off the lights in the living room, Amazon said Thursday in a statement. Last year's comparable model was $149.

While Amazon's core business remains selling goods online, it has been expanding into low-cost gadgets like tablets as a way to enter the homes of more people and convert them into loyal Amazon shoppers. The company sees customer retention as a way to profitability, more so than making money on individual gadgets.

"We believe in a different approach to tablets - providing premium products at non-premium prices - and customers love it," Kevin Keith, general manager of Fire tablets, said in the statement. Amazon has more than doubled its Fire tablet sales year over year, he said.

The Fire HD 8 will compete with incumbents such as Apple Inc.'s iPad and Samsung Electronics Co.'s Galaxy Tab as demand for tablets continues to wane. Industry researcher IDC expects the global tablet market to reach an all-time low, slowing 12 percent this year. Tablet sales have been declining as smartphone screens get bigger and blur the distinction between the two. Amazon's strategy to cut prices and go for volume may be wise in such conditions, according to IDC.

"We see smaller slate tablets being offered at very aggressive price points, leaving little room for revenues outside of a pure volume or platform play like for Amazon," Jean Philippe Bouchard, a research director at IDC, said in the August 30 forecast.