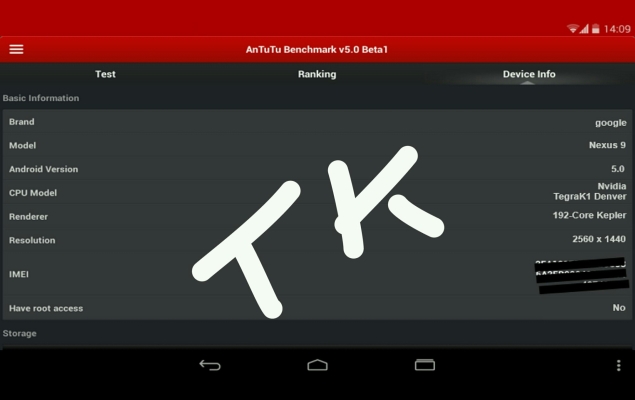 The rumour mill suggests Google's next Nexus launches will be on October 31, and we are expecting an HTC-made Nexus 8.9 or Nexus 9 tablet, apart from the Motorola-made Nexus X. The HTC Nexus tablet rumours have been around for a while, and the latest is based around an alleged AnTuTu benchmark listing for the unannounced tablet which points to an LTE variant of the tablet.

The alleged 'Google Nexus 9' AnTuTu benchmark results revealed a score 45,923, which as per the test's rating system is 'Amazing' performance. The benchmark results show the tablet running on an Nvidia Tegra K1 Denver processor, which is a 64-bit chip - ideal for the upcoming Android L release, which features 64-bit support. The display resolution is listed as 1440x2560 pixels (Quad-HD), for the rumoured screen size of 8.9-inch or 9-inch, as learnt from the previous leaks. The Android version in the listing is 5.0, expected to be the version number of Android L - which has been rumoured to be named Android Lemon Meringue Pie (LMP).

Apart from limited specifications, the alleged Google Nexus 9 benchmark results leaked by Tktechnewsblog also includes an IMEI number (International Mobile Station Equipment Identity), suggesting the device will come with cellular network connectivity. The blog also speculates the alleged Nexus tablet to have LTE, which while no real surprise for a Nexus tablet indicates Google may release the LTE-variant alongside the Wi-Fi only variants it traditionally releases first.

Earlier this month, we heard some details about the alleged HTC-made Nexus 8 tablet, which was previously referred to as 'volantis/ flounder'. A Twitter user named UpLeaks had claimed that the alleged Nexus 8 has been codenamed T1, and will come with Android L out-of-the-box.

The tipster has also listed some of the purported specifications of the alleged Nexus 8 tablet, which included the same 64-bit Tegra processor along with MDM9x25 modem (3G model); 4GB of RAM; an 8-megapixel rear camera with flash; a 1.6-megapixel front camera, as well as GPS and NFC connectivity.

An earlier report had suggested that the alleged Nexus 8 tablet would run the 64-bit Nvidia Tegra K1 chipset, along with an incredible 5GB of RAM.