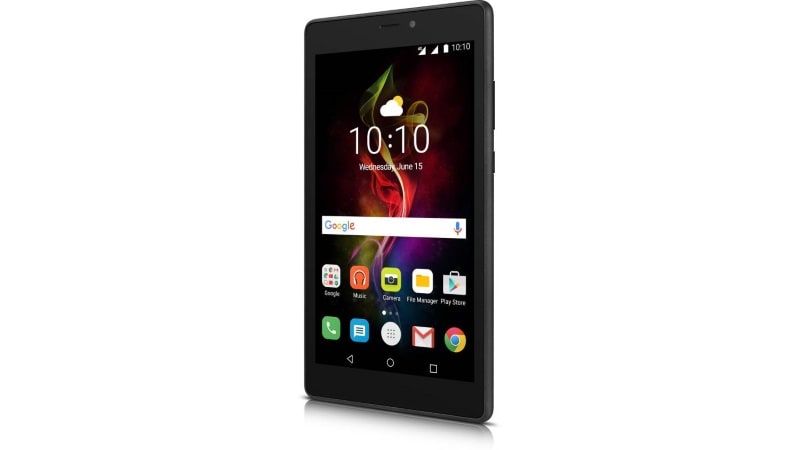 Alcatel on Monday launched its Pixi 4 (7) tablet in India. The new tablet has been launched in two variants, 4G and Wi-Fi, and has already been made available exclusively through Flipkart at Rs. 6,499 and Rs. 3,999 respectively in the country.

Coming first to the Alcatel Pixi 4 (7) 4G variant, the dual-SIM tablet has been launched in Smoky Grey and Volcano Black colours. It runs Android 6.0 Marshmallow and sports a 7-inch HD (600x1024 pixels) display. The Pixi 4 (7) 4G is powered by a 1.1GHz quad-core MediaTek MTK8735D processor coupled with 1GB of RAM.

In terms of optics, the 4G variant of the tablet comes with an 8-megapixel primary camera and a 5-megapixel camera at front for taking selfies or making video calls. The Pixi 4 (7) 4G comes with 16GB of built-in storage, which is expandable up to 64GB via microSD card. The tablet houses a 4000mAh battery, measures 190.2x106x8.9mm, and weighs 260 grams.

In terms of connectivity, the 4G variant of the tablet offers options including 4G connectivity, Wi-Fi 802.11 b/g/n, Bluetooth, and USB 2.0.

Speaking at the launch, Praveen Valecha, Regional Director at Alcatel India said, "The Pixi 4 (7) series isn't just a tablet. It is an all in one package, which is made for a hassle free and seamless user experience. Continuing with Pixi 4 (6) success we want to target the millennials who enjoy watching movies while on the move. The phone provides 8.25 hours of video playback and designed to be ultra -sleek ,dust and splash proof."

The Wi-Fi variant of the Pixi 4 (7) is powered by a 1.3GHz quad-core processor coupled with 1GB of RAM as well. The tablet comes with 8GB of inbuilt storage, which is further expandable up to 32GB via microSD card. The device measures 189.2x107.6x9.15mm and weighs 250 grams.

"The Pixi 4(7) WiFi has set a precedent for tablets. It provides our users with an array of essential features at an affordable price. The phone is designed to be extra thin at 9.15mm, light as a feather in your hands. This tablet is the ideal companion for the ones on the lookout for a device that takes care of all their needs," Valecha said regarding the launch of Wi-Fi variant.

Notably, the tablets being launched are very similar to the Alcatel OneTouch Pixi 4 (7) tablets launched back in January 2016, with minor differences in terms of battery and processor.