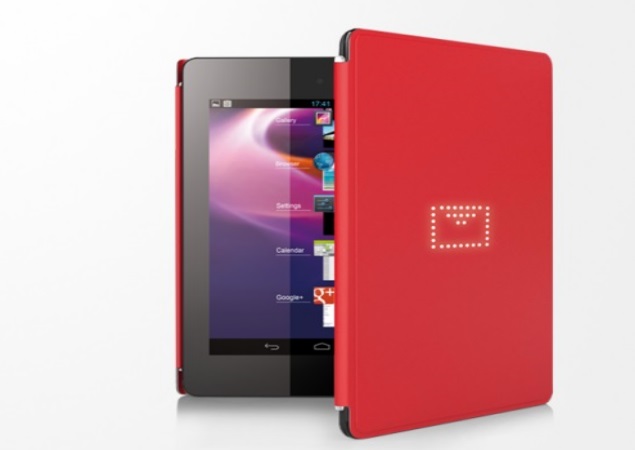 Alcatel has revealed details of its first tablet, the One Touch Evo 8 HD. The new tablet has now been listed on company's official website.

The Alcatel One Touch Evo 8 HD tablet comes with an 8-inch IPS display with a resolution of 1024x768 pixels. The tablet measures 152.5x222x9mm and weighs around 415 grams. It runs on Android 4.2 Jelly Bean. The device is powered by dual-core processor clocked at 1.6GHz along with 1GB of RAM. There is 3-megapixel rear camera and a 2-megapixel front camera. It comes with 4GB of internal storage which can be expanded up to 64GB with the help of microSD card. The tablet comes 3G and 4G connectivity options as well as Wi-Fi, Bluetooth, GPS and Micro-USB. Alcatel One Touch Evo 8 HD comes with a 4160mAh battery that can deliver up to 200 hours of standby time with a charging time of 3.5 hours.

However, Alcatel has not announced the pricing of the tablet or when it is expected to hit the markets.

Alcatel has also listed two new smartphones in its One Touch portfolio, the Idol S and Idol Mini.

The Alcatel One Touch Idol S comes with a 4.7-inch IPS HD display with 720x1280 pixels resolution and features Dragontrail Glass with oleophobic coating. The smartphone is powered by 1.2GHz dual-core processor with 1GB of RAM. The One Touch Idol S sports an 8-megapixel rear camera accompanied by an LED flash and is capable of recording full-HD videos. It also comes with a 1.3-megapixel front camera. The smartphone runs on Android 4.2 Jelly Bean.

The Alcatel One Touch Idol Mini features a 4.3-inch FWVGA display with 480x854 pixels resolution. It is powered by a 1.3GHz dual-core processor along with 512MB RAM. The Alcatel One Touch Idol Mini comes in two variants - single SIM and dual SIM. The internal storage on the single-SIM variant is 4GB, which can be expanded up to 32GB, while the dual-SIM variant comes with 8GB of non-expandable storage.