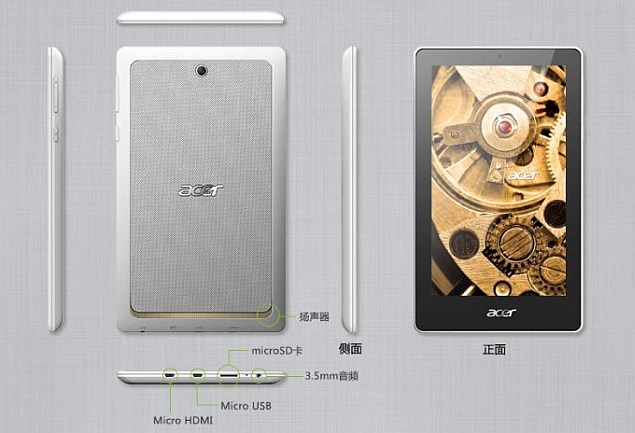 The yet-to-be-announced Acer Tab 7 budget Android tablet has been listed on a Chinese online retailer, retailing for a rather affordable 600 Chinese yuan, or roughly Rs. 6,000. Since the Acer tablet has been listed only on a Chinese retail website, the Acer Tab 7 for now seems to be a China-specific product at the moment, though official global launch plans can't yet be ruled out.

Spotted on JD.com by Phonearena, the Acer Tab 7 features a 7-inch screen with a 1024 x 600 pixel resolution and runs on the Android 4.2 Jelly Bean OS. The device is powered by a dual-core Cortex-A9 processor clocking at 1.5GHz and is paired with 1GB RAM.

The Acer Tab 7 includes a 3-megapixel rear camera and a 1.9-megapixel front-facing camera, along with 8GB of in-built storage, which can be expanded up to 32GB via external microSD card.