Poll: Which tablet - real or rumoured - are you most looking forward to? 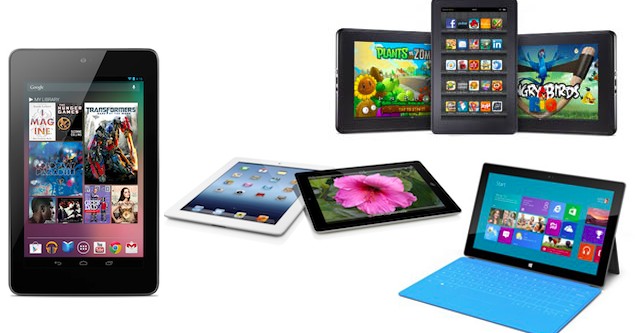 The tablet wars are well and truly hotting up. As Apple's iPad continues to dominate the landscape, Microsoft looked to shake things with its Surface tablet.

Redmond says its device will attach to a removable rubberized keyboard that also acts like a book cover. Microsoft is positioning it as an entertainment device "without compromising the productivity that PCs are uniquely known for". One version of the Surface, which won't go on sale until sometime in the fall, is 9.3 millimeters thick and works on the Windows RT operating system. It has a screen that measures 10.6 inches diagonally. A slightly thicker version will work on Microsoft's upcoming Windows 8 Pro operating system and cost as much as an Ultrabook, the company said. (See: Microsoft unveils 'Surface' tablet with Windows RT, Windows 8 Pro)

Google announced its entry into the tablet market with Nexus 7, a result of its collaboration with Taiwanese manufacturer Asus. The tablet features a 7-inch screen and an attractive $199 price-tag. It comes with the new 4.1 "Jelly Bean" version of Google's OS Android, as well as a front-facing camera, a 1280x800 resolution screen, and an Nvidia Tegra 3 processor. The Nexus is available in the US today, though India availability remains to be seen. (See: Google unveils $199 Nexus 7 to take on iPad, Kindle)

And finally, this week has seen multiple reports indicating the big-daddy of the tablet market, Apple, is working on a smaller, cheaper tablet. The screen-size, price could vary between 7-inch and 8-inch, $199 and $299 respectively, depending upon the reports you believe. (See: More reports confirm Apple's smaller iPad)

Question is, which of these tablets are you most looking forward?