On Thursday, Flipkart announced the launch of a new tablet, the Digiflip Pro XT 712. Priced at Rs. 9,999 and being sold with benefits "worth Rs. 9,000", at first glance the new tablet seems like a pretty good buy. The specifications aren't cutting edge, but neither is the price.

For your money, you get a dual-SIM calling tablet with 3G support, running on Android 4.2.2 Jelly Bean, and a 7-inch 1280x800 pixel IPS display. Powered by a 1.3GHz quad-core processor and 1GB of RAM, the tablet might not be exceptionally powerful, but should meet most people's usage needs. It also comes with 16GB of inbuilt storage, and supports a microSD card of up to 32GB, so it could easily find use as a media device.

The tablet has a 5-megapixel camera on the back, with an LED flash, and there is also a 2-megapixel front camera. A 3000mAh battery promises to deliver up to 8 hours of talk time, and it is also light, weighing 285g.

As such, it's a middle-of-the-road device that isn't significantly different from other similarly priced tablets on the market.

It's a deal?
The tablet can't therefore be called a steal, but it still manages to be an interesting buy considering that Flipkart's various offers can effectively reduce the price of the tablet. Buyers will get a free one-month subscription on Flipkart First and a 50 percent discount on cases worth Rs. 799 for the tablet.

The tablet will also be bundled with a Plantronics ML2 Bluetooth headset, which costs Rs. 1,199 otherwise, and the biggest offers are that it will include free e-books worth Rs. 2,300, and shopping deals worth Rs. 5,300.

The tablet comes preloaded with the Flipkart ebooks and Flipkart shopping apps, so you can start taking advantage of the deals. But there's a catch. You aren't getting a discount on any product you want to buy, or vouchers worth Rs. 5,300 you can spend as you like. However, if you use the app on your tablet, you can get some one time discounts on a limited selection of products.

This means, for example, that the next time you buy over Rs. 2,500 worth of clothing from Flipkart, you will get a Rs. 500 discount. Once.

Prefer buying clothes elsewhere, and use Flipkart just for books? Sorry, but physical books are not covered. To get that full value, you'll need to purchase one each of 13 different products, from such disparate categories as laptops, clothes, toys, speakers and international beauty products. And you need to get them all done before December 31. 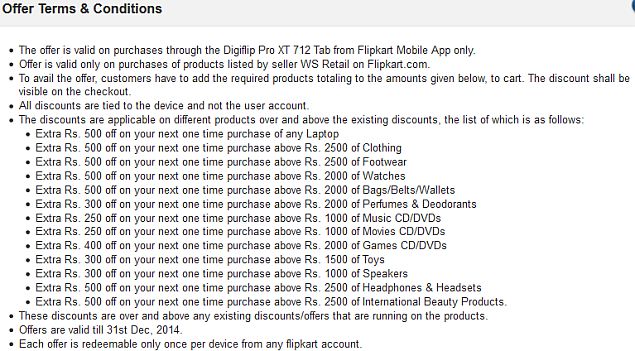 The free ebooks are also a limited selection of books - you can't pick and choose what you want to buy. Instead, you get such gems as Speed Post by Shobha De, Revolution 2020 by Chetan Bhagat, and A Love Story in Reverse, by Sujir Pavithra Nayak. That last one, incidentally, is available as an ebook on Flipkart for Rs. 19.

No digital ecosystem
Buyers will continue to receive exclusive deals on Flipkart, and it is possible that over time, the tablet might actually become a deal. However, the comparison to Amazon's Kindle Fire family of devices highlights one of the key shortcomings of Flipkart's Digiflip Pro XT 712 tablet. There's a limited digital ecosystem available.

With the Kindle Fire, the moment you switch it on, you're in Amazon's world. Compared to Google Play, content is curated in a much more understandable manner on the Amazon Appstore, recommended apps actually make sense, and the daily free apps make it easy for anyone to get used to downloading apps.

Amazon also has a world of digital content that includes books, movies, music and television (not all of it is available in India), and it's all presented front and centre in the Kindle Fire. You can buy content incredibly easily, and there's a huge variety of it available.

Even in India, where Amazon Prime and Amazon Instant Video aren't available yet, there's still a fair amount of content you can easily buy.

Flipkart on the other hand only has ebooks. The company doesn't have any digital movies or television shows, and it exited the digital music business over a year ago.

We asked Michael Adnani, Vice President-Retail and Head of Brand Relations, Flipkart, about the company's plans for digital music, and he said that the focus, going forward, would be on books and education.

This is extremely disappointing to hear, because while there are of course a huge number of apps which let you buy these various kinds of media, they are all Android apps outside of Flipkart. That's the whole point of the Kindle Fire - the company owns its own content distribution mechanism, and can offer special deals for its users on so many services across the board.

Flipkart, on the other hand, is offering small discounts on a limited number of products, and giving away some books that you might very well not want to read. And that's it.

This is a bigger problem than just the tablet released today - Flipkart will be launching more tablets over time, which will sit at other price points and have different value propositions. But with the terms and conditions in place, and the limited digital ecosystem, the tablet hardly stands out from the competition, and can't be compared to the Amazon Kindle Fire.

Further reading: Amazon, Digiflip Pro XT 712, Flipkart, Kindle Fire, Tablets
Gopal Sathe Email Gopal Gopal Sathe is the Editor of Gadgets 360. He has covered technology for 15 years. He has written about data use and privacy, and its use in politics. He has also written extensively about the latest devices, video games, and startups in India. Write to gopal@ndtv.com or get in touch on Twitter through his handle @gopalsathe with tips. More
eBay Rejects Auction of Nazi Chief's Mercedes Benz
iPhone 6 5.5-Inch Model to Feature 128GB Variant and OIS Camera: Report