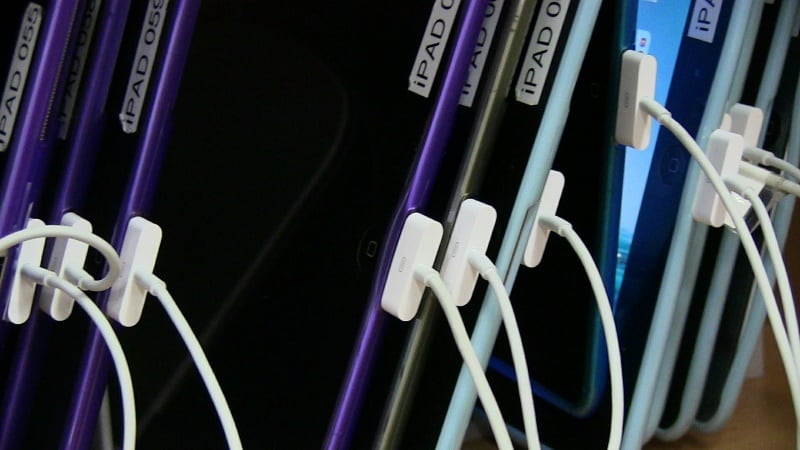 Awad Lsallum has been waiting for a heart for 40 days at Cedars-Sinai Medical Center in Los Angeles. One of the worst parts of a long hospital stay, he said, can be not having a clear picture of what your situation is, or even who is taking care of you as the days drag on.

But now, at least at Cedars-Sinai, there's an app for all of that. Actually, there's a whole tablet. The hospital is offering some patients the option to check out iPads during their stay for free, to provide more insight into their own health. The program offers a glimpse of how Apple is trying to further tap into the $3 trillion (roughly Rs. 1,93,29,404 crores) health-care market.

For hospitals, using these mobile devices can present patient health data in an accessible way, making it easier for patients and doctors to speak to each other. For Apple, it's a larger effort to focus more heavily on services rather than only products - a move that guarantees steady income and engagement, even if individual consumers aren't buying as many devices.

"Apple's the only one that I've seen that has the most concentrated strategic vision within the company's DNA to do this as a calculated part of their business," said analyst Tim Bajarin of Creative Strategies.

Many consumer tech companies have been angling to get into the health tech market over the past few years. Fitbit data - step counts, heart rate, etc. - have been used in medical trials on mobility. Google has been investing in advanced medical research, such as work to combat aging.

Within the past two years, Apple launched its Health app and Apple Watch. The Cupertino, California, company also employs 13 exercise physiologists and specialists, plus 29 nurses and medics at a testing lab it uses to develop health and fitness tech near its headquarters. Apple recently bought the sleep-tech company Beddit, and is reportedly working on a diabetes glucose-monitoring device that won't pierce the skin. And they are also taking extra steps to move beyond the realm of consumer devices to put more Apple technology into hospital rooms - including into the hands of patients.

The Cedars-Sinai pilot, which began last year, is limited but has helped improve communication between doctors and patients, hospital staff said. So far, only people who have heart conditions, like Lsallum, and women who have just given birth have been able to participate. The hospital chose these patients because they are two types of patients that tend to want a lot of real-time data, and quickly, hospital officials said.

Patients have used the iPads to address a common gripe: finding a better way to keep track of all the practitioners in the seemingly endless rotation that takes care of them. The patients have also viewed their own health data, such as their heart rates or their glucose readings, and learned what those vitals mean.And they can also watch or read educational material about their procedure from the iPad through the hospital's app, which can make it easier for nurses to know and mark what the patient has reviewed.

For the practitioners, this has led to better conversations because the patients have more informed questions and feel that they are more a part of their own care.

"I would say it quells anxiety for patients," Miller said.

And as part of the discharge procedure, patients set up an account to get access to their health records and education information once they leave the hospital. Patients who've been through the pilot program are better at following their doctors' instructions once they're home.

It hasn't all been smooth sailing. There is a concern that giving patients too much information, or information they may not understand, could lead them to worry more than necessary. After all, it's common for an abnormal lab or unexpected change in a particular vital sign to turn out to be an anomaly. Ultimately, Cedars-Sinai decided to delay sharing some results with patients for at least a day to allow doctors to review and explain the information. Part of designing these apps is also figuring out the limits of what data can do, said Shaun Miller, a physician at Cedars-Sinai who also serves as its associate chief medical information officer.

Issuing devices to patients is just one approach for changing the way we use tech in hospitals. John Halamka, a physician and health sector chief information officer who has looked for years at ways to integrate consumer technology and hospital tech, said another approach is to let patients access similar information, but using apps on their own phones.

As technology firms and the medical industry continue building partnerships, some companies worry they may face oppressive regulations from the Food and Drug Administration. The FDA's rules on which apps and devices it regulates are still a work in progress. So far, Apple and others have avoided regulation because their products don't make diagnoses or try to replace existing medical equipment.

When asked for comment about its strategy toward health tech, Apple pointed The Post to remarks that chief executive Tim Cook made earlier this year.

"The things that interest us the most are things where we can bring our ability to integrate hardware, software, services into something that's magical, and enriches people in some way," Cook said at a start-up conference in Europe this past spring. "If you look at some of the things that do not drive revenue, but have massive interest in them from our teams, health is very much one of those."