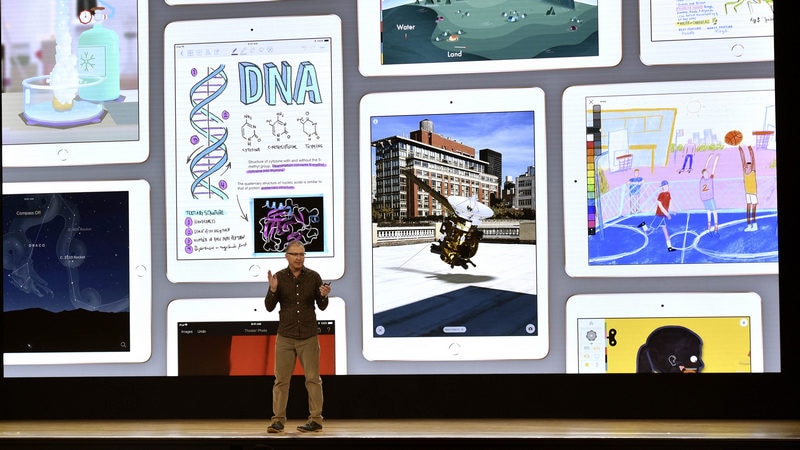 Apple is going head-to-head with Google in education, a market the iPhone maker helped pioneer but has let languish.

For the first time in several years, Apple released hardware specific to education: a new iPad that squares up against Google's inexpensive Chromebook laptops, which have become popular in schools. Apple also introduced an education service called Schoolwork, which will compete with Google's Classroom software.

Apple executive Greg Joswiak called the new iPad "faster than virtually any Chromebook" during an event at a Chicago school on Tuesday. This was the first time Apple held a product launch geared toward education since 2012 when it unveiled a tool for designing e-books for the iPad.

Apple accounted for 17 percent of mobile computing shipments to American students in kindergarten through high school, according to data from the third quarter of 2017 published by Futuresource Consulting. Devices running Google's operating systems held 60 percent of the market, and Windows PCs had 22 percent. While Macs and iPads make up less than 20 percent of Apple's sales combined, students and teachers are a key market to drive future purchases.

Marketing executive Susan Prescott announced a new app called Schoolwork for iPads that helps teachers assign work and monitor student progress. The iPhone maker also unveiled a new service called ClassKit, which allows developers to write apps that integrate with the Schoolwork service. This will let teachers send students to specific parts of apps to conduct classwork or access material. The new apps will be available in June, Apple said.

With the cheaper iPad and new education platform, Apple is banking on changing its foothold in education, but the lower-cost tablet could also help buoy iPad sales more widely.

While the iPad business recently returned to growth after multiple declining quarters, demand for tablets is weak. According to research firm IDC, the market shrank by about 7 percent in 2017. Apple grew 3 percent last year and leads the industry with about a quarter of the market. A cheaper model that integrates Apple's hardware with new services could help revive the tablet market. Later this year, Apple plans to unveil a redesigned iPad Pro with features from the iPhone X like facial recognition, Bloomberg News reported last year.

The new iPad still includes the Touch ID fingerprint scanner, versus Face ID 3-D sensor system on the iPhone X. But the tablet adds a new A10 Fusion chip which was first released in the iPhone 7 in 2016, up from the A9 in the previous low-cost iPad.

Apple also previewed a new feature called Smart Annotation that lets users annotate specific words on a page. An update to the Pages iWork app will also let users create their own digital books via the iPad.

The company said its Classroom student-management app for iPads will be coming to Mac computers, and it is updating its Swift Playgrounds coding application with support for building augmented-reality apps. Apple also announced a new curriculum called "Everyone Can Create" that helps teachers conduct lessons on music, photography and video creation.

The software announcements aren't Apple's first stab in the education market. Steve Jobs made schools a priority for Apple early in its life. But as the company has driven toward mass-market and higher-margin products in recent years, Google and Microsoft Corp. have had success breaking into classrooms with inexpensive laptops and tablets. Last year, the global educational technology market generated $17.7 billion in revenue, according to research firm Frost & Sullivan.