TCL is a Chinese company that designs, develops, manufactures and sells products including television sets, mobile phones, air conditioners, washing machines, refrigerators and small electrical appliances. TCL is also the parent company of Alcatel OneTouch brand. A range of smartphones running Google's Android operating system have been launched under the Alcatel OneTouch brand. TCL's latest mobile launch is the Tab 10s. The tablet was launched in 12th January 2021. The tablet comes with a 10.10-inch touchscreen display with a resolution of 1200 pixels by 1920 pixels.

The TCL Tab 10s is powered by 2GHz octa-core MediaTek MT8768 processor and it comes with 3GB of RAM. The tablet packs 32GB of internal storage that can be expanded up to 256GB via a microSD card. As far as the cameras are concerned, the TCL Tab 10s packs a 8-megapixel primary camera on the rear and a 5-megapixel front shooter for selfies. 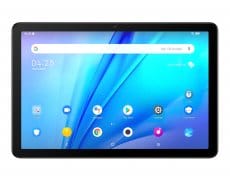