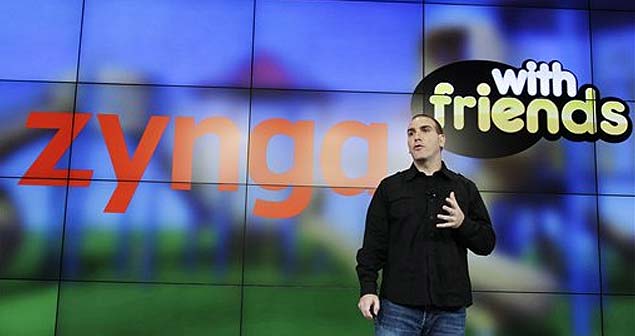 Zynga Inc unveiled a social network for gamers dubbed "Zynga with Friends" on Tuesday, hoping to wean itself from a longstanding, symbiotic relationship with Facebook Inc that has shaped two of Silicon Valley's closely watched Internet companies.

The game publisher, which has been under pressure to reverse a steep slide in stock price in recent months, said its new network will pair gamers with opponents and make features like player profiles, an activity stream and chat available for all users, regardless of whether they play Zynga games on mobile devices or on desktop computers.

Zynga with Friends is "one network, one unified experience, and one social lobby that will for the first time connect all of our players, no matter where they're playing," Manuel Bronstein, a senior Zynga executive, told reporters at a press event in the company's headquarters in San Francisco.

"The new social features and services are designed for the sole purpose of bringing more people to play together," Bronstein said.

Zynga will also provide programming tools to help third-party developers publish online and mobile games based on its own software, executives said, in order to foster a Zynga "ecosystem" that will expand its slate of titles beyond mainstays such as "Farmville" and "Zynga Poker."

Still, Zynga shares closed nearly 5 percent lower on Tuesday as investors saw little in the announcement - which included the planned social network, as well as a bevy of new game titles - to drive strong long-term growth.

The company announced "FarmVille 2," a sequel to its megahit resource management title, as well as "Matching with Friends," an addition to a suite of smartphone games that includes the popular "Words with Friends."

"One of the worries is that the whole idea of social gaming seems to be waning somewhat," said Paul Verna, a gaming analyst at eMarketer. "There doesn't seem to be a lot of growth left, and the idea of unveiling another Ville game or FarmVille 2 - I don't get the sense that's very exciting to the financial investors."

Cozy partnership
Zynga's moves, while long expected, have stirred speculation around the future of its cozy partnership with Facebook, a company that owed 15 percent of its first quarter revenue to fees from Zynga. The two companies also confirmed recently that Facebook has begun showing ads from its inventory inside Zynga games, which are played by some 290 million people.

Meanwhile, Facebook's reach of close to 1 billion users has helped distribute Zynga's games and propel the publisher to a dominant position in the social gaming industry, but analysts have warned that Zynga needs to seek greater independence to sustain growth, especially as Facebook's expansion inevitably slows.

Colin Sebastian, an analyst at R. W. Baird, said the Zynga with Friends network "is a natural step in the right direction as they leverage their technology infrastructure and user base. On one hand it might help them become less dependent on Facebook, but from a practical perspective they will continue to remain dependent on Facebook for quite some time."

Asked to comment, Facebook issued a statement that betrayed no concern about Zynga's announcement. "It's exciting to see Zynga continue to build with Facebook across web and mobile platforms."

Responding to questions from reporters on Tuesday, Zynga executives took pains to stress that the expansion of its own social network did not threaten its existing relationship with Facebook.

"We've had a longstanding agreement with Facebook that we would do these kinds of things," said Reed Shaffner, Zynga's director of product. "In no way are we trying to use that to say you have to play on this platform."

"The idea is that we'll help you find the best gaming friends anywhere you play," he added.

Executives said the platform could potentially have as many as 290 million users with some 2.8 billion daily social interactions once it is rolled out, although a launch date was not specified.

Targeting mobile
Zynga acknowledged on Tuesday that it is also trying to boost mobile usage, targeting a small but faster-growing wireless device gaming market that is quickly becoming a crucial battleground for so-called casual or social gaming.

The company said Tuesday it will also team up with Atari SA to develop games, but did not elaborate.

Zynga executives said they will provide developers a set of "application programming interfaces" - APIs - to make it easier for them to craft games using Zynga's software.

"We're opening our doors today and opening Zynga Partners for Mobile. We are inviting developers from all over the world to come and join our network," said David Ko, chief mobile officer.

The company also announced new titles including ChefVille, a kitchen management game, and The Ville, a game resembling "The Sims" that allows users to build homes and dress their avatars to interact and pursue romantic relationships with other users.

Even so, analysts said Zynga, facing mounting scrutiny from investors, may need to look beyond its familiar repertoire to attract new gamers and keep existing ones hooked.

"One area where they may have disappointed people is, they are not showing any games in development that target a more core gamer, or so-called mid-core gamer," said Sebastian, the Baird analyst. "That's something where we've seen a lot of growth for Facebook, and that's potentially a missed opportunity for Zynga."