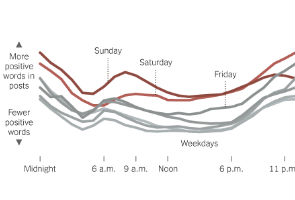 Highlights
However grumpy people are when they wake up, and whether they stumble to their feet in Madrid, Mexico City or Minnetonka, Minn., they tend to brighten by breakfast time and feel their moods taper gradually to a low in the late afternoon, before rallying again near bedtime, a large-scale study of posts on the social media site Twitter found.

Drawing on messages posted by more than two million people in 84 countries, researchers discovered that the emotional tone of people's messages followed a similar pattern not only through the day but also through the week and the changing seasons. The new analysis suggests that our moods are driven in part by a shared underlying biological rhythm that transcends culture and environment.

The report, by sociologists at Cornell University and appearing in the journal Science, is the first cross-cultural study of daily mood rhythms in the average person using such text analysis. Previous studies have also mined the mountains of data pouring into social media sites, chat rooms, blogs and elsewhere on the Internet, but looked at collective moods over broader periods of time, in different time zones or during holidays.

"There's just a torrent of new digital data coming into the field, and it's transforming the social sciences, creating new lenses to look at all sorts of behaviors," said Peter Sheridan Dodds, a researcher at the University of Vermont who was not involved in the new research. He called the new study "very exciting, because it complements previous findings" and expands on what is known about how mood fluctuates.

He and other outside researchers also cautioned that drawing on Twitter had its hazards, like any other attempt to monitor the fleeting internal states labeled as moods. For starters, Twitter users are computer-savvy, skew young and affluent, and post for a variety of reasons.

"Tweets may tell us more about what the tweeter thinks the follower wants to hear than about what the tweeter is actually feeling," said Dan Gilbert, a Harvard psychologist, in an e-mail. "In short, tweets are not a simple reflection of a person's current affective state and should not be taken at face value."

The study's authors, Scott A. Golder and Michael W. Macy, acknowledge such limitations and worked to correct for them. In the study, they collected up to 400 messages from each of 2.4 million Twitter users writing in English, posted from February 2008 through January 2010.

They analyzed the text of each message, using a standard computer program that associates certain words, like "awesome" and "agree," with positive moods and others, like "annoy" and "afraid," with negative ones. They included so-called emoticons, the face symbols like ":)" that punctuate digital missives.

The researchers gained access to the messages through Twitter, using an interface that allows scientists as well as software developers to work with the data.

The pair found that about 7 percent of the users qualified as "night owls," showing peaks in upbeat-sounding messages around midnight and beyond, and about 16 percent were morning people, who showed such peaks very early in the day.

After accounting for these differences, the researchers determined that for the average user in each country, positive posts crested around breakfast time, from 6 a.m. to 9 a.m.; they fell off gradually until hitting a trough between 3 p.m. and 4 p.m., then drifted upward, rising more sharply after dinner.

To no one's surprise, people's overall moods were lowest at the beginning of the workweek, and rose later, peaking on the weekend. (The pattern of peak moods on days off held for countries where Saturday and Sunday are not the weekend.)

The pattern on weekend days was shifted about two hours later -- the morning peak closer to 9 a.m. and the evening one past 9 p.m., most likely because people sleep in and stay up later -- but the shape of the curve was the same.

"This is a significant finding because one explanation out there for the pattern was just that people hate going to work," Mr. Golder said. "But if that were the case, the pattern should be different on the weekends, and it's not. That suggests that something more fundamental is driving this -- that it's due to biological or circadian factors."

The researchers found no evidence for the winter blues, the common assumption that short winter days contribute to negative moods. Negative messages were as likely during the winter as in the summer.

But positively rated messages tracked the rate at which day length changed: that is, they trended upward around the spring equinox in late March, and downward around the fall equinox in late September. This suggests that seasonal mood changes are due more to a diminishing of positive emotions in anticipation of short days, the authors say.

Dr. Dodds, the University of Vermont researcher, has been doing text analysis of Twitter messages worldwide as well, to get a reading on collective well-being, among other things. He said the new study comported well with his own recent analysis. "We find that swearing goes up with negative mood in the very same way," he said. "It tracks beautifully with the pattern they're showing."

Social scientists analyzing digital content agree that, for all its statistical appeal, the approach still needs some fine-tuning. On Twitter, people routinely savage others with pure relish and gush sarcastically -- and the software is not sophisticated enough to pick up these subtleties.

"I suspect that if you counted the good and bad words people said during intercourse, you'd mistakenly conclude that they were having an awful time," Dr. Gilbert said.
Comments