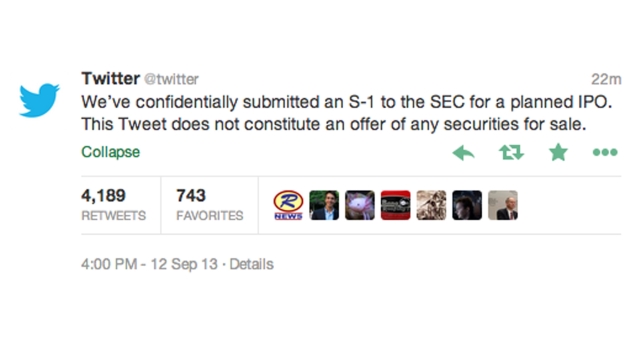 Twitter Inc has filed for an initial public offering with U.S. regulators, the company said on Thursday, taking the first step toward what would be Silicon Valley's most anticipated debut since Facebook Inc's last year.

The impending IPO of the microblogging phenomenon ignited a competition among Wall Street's biggest names for the prestige of managing its coming-out party. Goldman Sachs is lead underwriter, a source familiar with the matter said on Thursday, which is a major coup for the Wall Street bank.

Twitter filed for an IPO confidentially under a 2012 law intended to help emerging corporations with less than $1 billion in revenue go public.

Seven-year old Twitter, which allows users to send out streams of 140-character messages, has become an indispensable tool to governments, corporations and celebrities seeking to communicate with their audience, and for individuals seeking both news and entertainment.

Facebook, however, has clawed its way back to its $38 IPO price in July, and the stock is at a record high after touching $45 this week.

Twitter, which has been valued by private investors at more than $10 billion, should break even this year and is on track for 40 percent annual growth at a $1 billion annual revenue run rate, Max Wolff of Greencrest Capital estimated.

"It's completely conquered mobile. It has an enormous social network. It's becoming a key utility as a second screen to TV and it's literally the first draft of history," Wolff said.

Since Jack Dorsey, Twitter's inventor, dispatched the first tweet from a downtown San Francisco office in March 2006, the service has grown into a worldwide phenomenon with more than 200 million regular users contributing more than 400 million posts a day.

But Twitter was one of the first to prove that in-stream ads could be a viable way to make money in the mobile era.

"There was a lot of concern about whether they'd ever be able to insert advertising into their site," said Forrester analyst Nate Elliott. "They've shown it can be effective. They offer in many ways better measurement for marketers than larger companies like Facebook."

Jostling for roles
Wall Street continues to jostle for a slice of its impending debut, sources told Reuters on Thursday.

Technology bankers at major banks from JPMorgan and Credit Suisse Group AG to Morgan Stanley are still vying for roles in the IPO. Several are in informal conversations with the microblogging network's management, said two sources familiar with the matter who declined to be named because it is not public.

A similar race is on around China's Alibaba, which is expected to raise more than $15 billion this year. Bank chief executives such as JPMorgan's Jamie Dimon and Citigroup Inc's Michael Corbat have made it a point to meet Alibaba founder Jack Ma.

Twitter's debut, though much smaller than Facebook's, could generate tens of millions of dollars in fees from the underwriting mandate itself. Assuming it sells around 10 percent of its shares, or $1 billion, underwriters could stand to divide a fee pool of $40 million to $50 million, assuming an overall fee cut of 4 percent to 5 percent, according to Freeman & Co.

But the benefits for banks that underwrite the deal would likely be far-reaching.

"Some companies will say, 'We liked the way you handled Twitter, and we want to come to you first when we do our IPO,'" said David Menlow, president of IPOFinancial.com.

"It's not only bragging rights," Menlow said. "It's getting through the front door, which will line up banks for other transactions done after that, like debt financings and M&A."

Twitter is allowed to file its registration statement confidentially due to the Jumpstart Our Business Startups (JOBS) Act, a 2012 law that loosened some of the regulations surrounding the IPO process and other forms of capital raising.

Companies that file under that law do not have to reveal certain details until 21 days before embarking on an investor roadshow.

It could allow Twitter to avoid some of the harsh public scrutiny that other tech companies such as Groupon Inc faced.

Meanwhile, Silicon Valley boosters who were left red-faced by Facebook's stumble are hoping that Facebook's recovery and a smooth Twitter IPO would turn investor sentiment back toward consumer Internet companies.

"If 2012 was the Facebook IPO horror story, then all of a sudden 2013 is looking very nice," said Rick Heitzmann, a venture capitalist at Firstmark Capital, which has invested in consumer Internet companies including Pinterest. "We're now seeing that these are real companies proving they can drive very, very impressive revenue."