The move appeared to be the first by Twitter against US president Donald Trump for an "abusive" tweet.

Twitter has been under fierce scrutiny from the Trump administration

Twitter on Tuesday hid a tweet from President Donald Trump in which he threatened to use "serious force" against protestors in the US capital, saying it broke rules over abusive content.

The move appeared to be the first by Twitter against the president for an "abusive" tweet. In a growing dispute, the platform has recently labeled other Trump tweets as misleading and violating its standards on promoting violence.

"There will never be an 'Autonomous Zone' in Washington, DC, as long as I'm your President. If they try they will be met with serious force!" Trump tweeted.

The action by Twitter requires users to click through to read the Trump tweet, with a tag on the message that it "violated the Twitter rules about abusive behavior" but that it would remain accessible "in the public's interest." 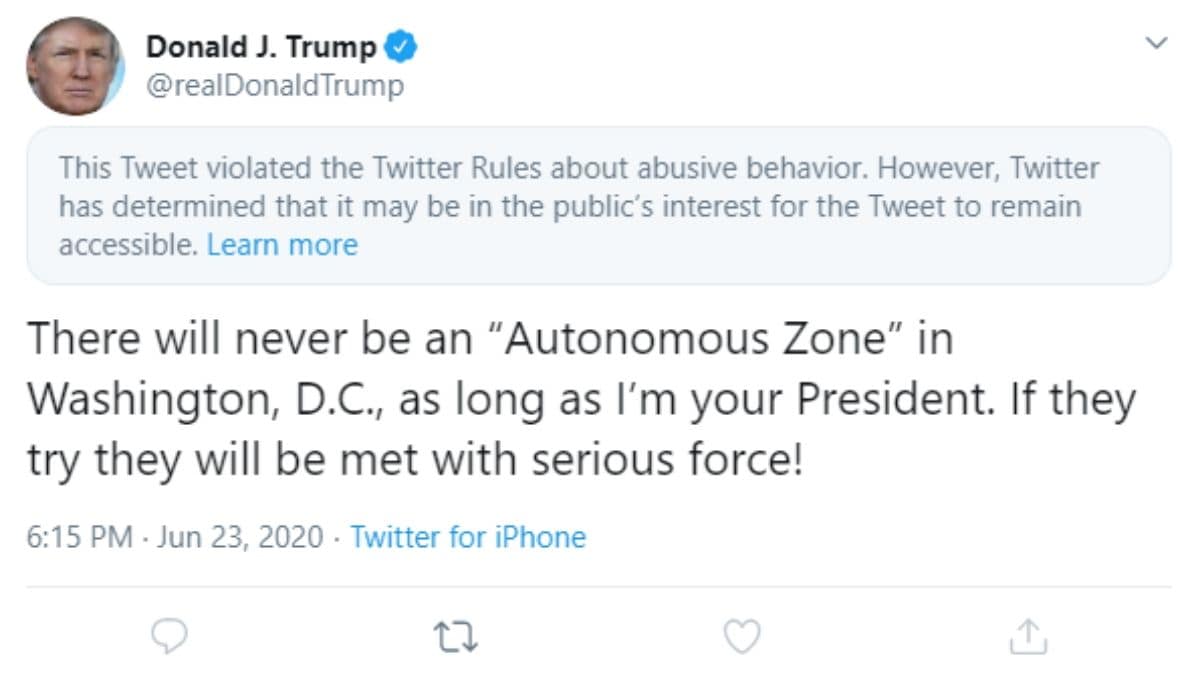 Trump's tweet referred to the police-free district created by protesters in Seattle, in Washington state, two weeks ago, which has sparked outrage among conservatives.

Twitter's move escalated the battle between the White House and social media firms which Trump has accused of bias against conservatives, despite his own large following.

The president has already signed an executive order which could lead to more government oversight of social media firms, despite doubts about its legal authority.

The Trump administration has also signaled it wants to overhaul a law that gives online services immunity from content posted by others, a move which could open the floodgates to litigation.

Twitter said in a statement to AFP it took the action Tuesday because the tweet violated its policy against abusive behavior with "a threat of harm against an identifiable group."

Twitter's policy in dealing with world leaders in most cases calls for violating messages to be labeled -- which limits its reach and prevents others from liking or retweeting it -- but leaves the tweets available because if they relate to "ongoing matters of public importance."

Facebook did remove a Trump ad last week that contained a symbol used in Nazi Germany for political prisoners, saying it violated the platform's policy against "organized hate."