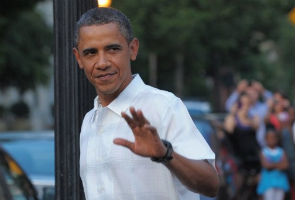 Will tweets make the difference in the 2012 US presidential election?

Twitter and other social media are being used by candidates to energize supporters, raise funds and shift the focus of the public debate for what some call the nation's first "social election" in November.

Twitter has the potential "to sway the national narrative," said Zach Green, head of the media consultancy 140Elect, which advises candidates on how to use Twitter.

Because Twitter democratizes the delivery of information, tweets can help a candidate by getting out a message that might not be seen on traditional media like newspapers and television.

"Twitter is a way of injecting a message into the national conversation... before anyone writes the story you can get your side out there," Green told AFP.

"You can also go around the national discussion because Twitter allows candidates to reach their constituencies without a gatekeeper."

Tony Fratto, a former White House and US Treasury spokesman in the George W. Bush administration who is now a partner in the consulting firm Hamilton Place Strategies, said Twitter can be a game-changer.

"It has made it possible for campaigns to immediately communicate with large numbers of potential voters in about the cheapest way you can imagine," Fratto said.

"Not only can you impress a message on millions of people, but you can respond to charges quickly. In the old days, you would have someone put a television ad, and it would take time to write a press release or produce an ad" to counter that, he said.

"With Twitter, the moment the charge or a critical ad or news report hits you are in a position to respond in your own voice immediately and to generate responses from your supporters."

President Barack Obama has a huge head start on Republican rival Mitt Romney on Twitter. The incumbent has some 18.7 million Twitter followers to fewer than 900,000 for Romney.

Green's analysis shows Obama tweets 10 times more often as Romney, and gets additional support on Twitter from his campaign. But Romney's tweets are more often shared and retweeted, suggesting his supporters are more "engaged," said Green.

Jeanette Castillo, a Florida State University professor specializing in digital media, said Romney has more money and support from political action committees, "so I'm watching to see how much the social media capital is worth."

"The extent to which it mobilizes people and gets them out will be interesting to watch," Castillo said.

In the 2008 election, Twitter was just getting started and had a limited impact, Castillo noted, because it had fewer users -- mainly younger people -- and was not as important for news media.

Now, Twitter is a major driver of news and the so-called "national conversation."

This was highlighted, Castillo said, by the furor created by US Senate candidate Todd Akin's comments on "legitimate rape" and earlier this year by the shooting death of unarmed black teen Trayvon Martin.

"I think it's becoming part of a bigger landscape and to the extent that it influences the mainstream media, it will have power."

Fratto said Obama had a "huge advantage" in the 2008 campaign over Republican John McCain but that in 2012, the Romney campaign has "a very sophisticated digital communication strategy."

He noted that while Obama tweets more often, some tweets from @BarackObama are not directly from him, but written in the third person.

"You should tweet more often but do it in your own voice," Fratto said.

A study by the Pew Research Center's Project for Excellence in Journalism said the Obama campaign "holds a distinct advantage" in its use of digital technology to communicate with voters, particularly Twitter.

More crucially, the Obama campaign is using digital means to target key groups such as Hispanics and women voters.

"While more digital activity does not necessarily translate into more votes, historically, candidates who are first to exploit changing technology have an advantage," said Rosenstiel.

The Pew report said that candidates who use these technologies demonstrate they are keeping up with the times.

"From Franklin Roosevelt's use of radio, to John F. Kennedy's embrace of television, to Ronald Reagan's recognition of the potential for arranging the look and feel of campaign events in the age of satellites and video tape, candidates quicker to grasp the power of new technology have used that to convey a sense that they represented a new generation of leadership more in touch with where the country was heading," the report said.