"Say more with revamped quote tweet! Rolling out on iPhone and web, coming soon to Android," reads the tweet. 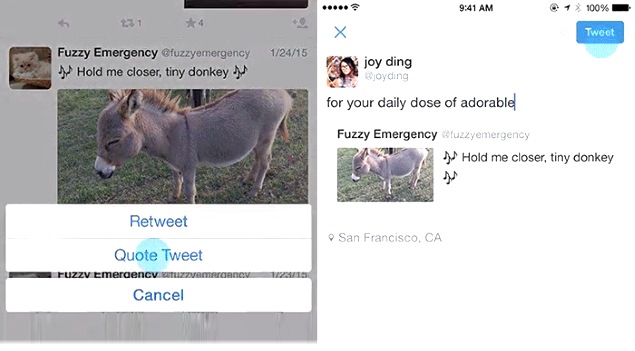 Further, users will now be able to add additional 116 characters along with the 140 characters of quoted tweet. With this, Twitter acknowledged and fixed users' complaints about the limited characters while quoting tweets.

The company recently revamped the profile layout for its Android and iPhone app with 'bigger photos' layout and more.

Last month, Twitter had announced that the ability to tag locations in tweets with Foursquare is "coming soon." The company previewed the feature in a video along with a tweet that reads, "Coming soon! We're working with @foursquare so you can tag specific locations in Tweets."

With the feature, users will be able to add a location to their tweets on the Web, as well as on Android, iOS, and all other Twitter mobile applications. Additionally, Android or iOS apps will be able to include precise location (e.g., the coordinates of the street intersection where you tweeted) in addition to the location label that the user selects.