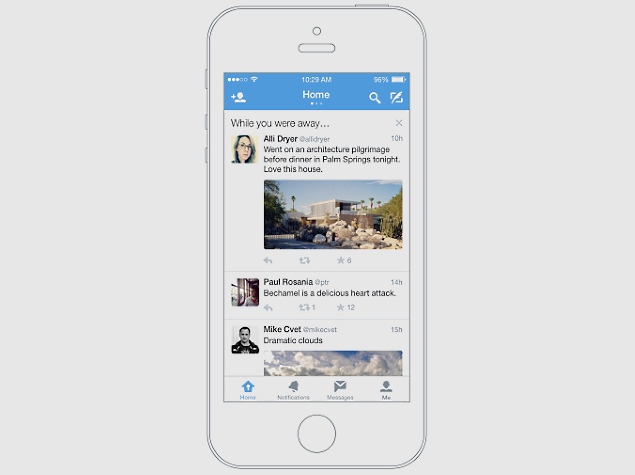 In November, Twitter had announced that there is a 'while you were away' recap feature in testing, and earlier this month some users reported the feature had started rollling out to them.

Now on Wednesday, Twitter officially posted a blog post announcing that the feature is called 'Recap', and will be visible to users with a 'While you were away...' heading. Twitter said Recap will begin rolling out to iOS users starting Wednesday, and soon for Android and Twitter on Web.

The company said that with a few improvements to the home timeline such as Recap, it can deliver a better experience without compromising the realtime nature of Twitter.

"A lot can happen while you're on the go. To fill in some of those gaps, we will surface a few of the best Tweets you probably wouldn't have seen otherwise, determined by engagement and other factors. If you check in on Twitter now and then for a quick snapshot of what's happening, you'll see this recap more often; if you spend a lot of time on Twitter already, you'll see it less," noted Paul Rosania, Product Manager at Twitter.

Meanwhile, the company has introduced the Web version of the Digits app for developers to offer logins via a phone number. Digits, which lets people create an account or sign into an app using phone number, is already available for Android and iOS apps.

With the Digits SDK for Web, developers can create the ability to login to apps via SMS-based login system, though it will still need to be set up on Android and iOS first. When the login is required for an app's website, users will be able to login with the same phone number as on the phone.

Additionally, for users with multiple Digits-enabled apps with accompanying sites, the previous login from a browser will be remembered, so that users will not need to log in again.