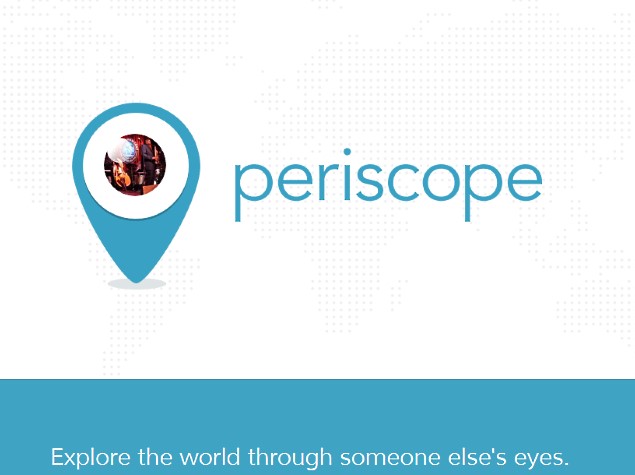 Twitter is reportedly in talks to purchase live video streaming app Periscope, which allows users to stream video from their smart devices to their followers in real time, similar to Meerkat.

A report by TechCrunch notes that talks between Twitter and Periscope are in early stages and deal amount could be around $100 million (approximately Rs. 622 crores).

As mentioned earlier, the Periscope live video streaming app is similar to Meerkat, a startup that in the recent past has garnered much interest across the Web. The Meerkat app allows Twitter users to share video streams in real time. The stream can be triggered with a link in tweet or by a notification to Twitter followers who use the Meerkat app. Anyone can see the live stream through the Web or Meerkat app. Viewers can simply comment with sending Twitter @ replies. The streamed video disappears like Snapchat, unless users save it at their end.

As yet there are no other details on the possible acquisition of Periscope. It was also speculated that Twitter might acquire Meerkat, due to its recent popularity. Twitter has earlier this month allowed video embed for tweets and embeddable video widget for websites.

Meanwhile, Twitter seems to be finally rolling out its long in-testing feature, which is an in-app browser for Web links shared in tweets. We had tested the browser last year, but then it only previewed text. Now according to an Android Police report on Wednesday, it appears that Twitter has added more to it but still going with simplified WebView. To remind you, Facebook has already rolled out an in-app browser for link posts.

On Tuesday, Twitter announced that users can now embed Twitter-hosted videos on any supported website. The option can be found under the 'more' prompt and functions in the same way regular embedding of a tweet.

Users on clicking the 'Embed Video' option will see an automatic generated HTML code, which can be used on any supporting website. While copy-pasting the HTML code, users will also have the option to "Include Tweet when logo is clicked."
Comments