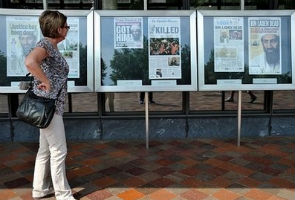 The San Francisco-based startup released updated figures from the messaging frenzy, which hit 5,000 "tweets-per-second" at times during a surge that lasted slightly more than four hours.

There was an average of 3,440 tweets-per-second from 0245 GMT to 0430 GMT on Monday, according to Twitter, as word of bin Laden's death rocketed around the Internet.

The barrage of tweets was among the highest message-sending outbursts ever at Twitter, which handled a record high number of 6,939 tweets-per-second when New Year's Eve arrived in Japan.

Twitter activity caused by the bin Laden raid eclipsed the peak of 3,966 tweets-per-second seen during Friday's royal wedding in Britain.

The March 11 earthquake and tsunami that devastated Japan resulted in heavy Twitter traffic that topped out at 5,530 tweets-per-second.

Messages tagged with "#osama" continued on Monday to top a list of the hottest topics at the microblogging service.

Bin Laden's death was also a major topic of conversation on Facebook, with users swapping stories and commenting on the news on their pages.

By Monday afternoon in California nearly 400,000 people had "liked" an "Osama bin Laden is Dead" page on Facebook.

The Facebook page was packed with comments, videos and pictures. Many of the comments lambasted the slain Al-Qaeda leader.

Meanwhile, a "We Are All Bin Laden" Facebook page in Arabic had attracted just 14,305 "likes."

And at geo-location service Foursquare, 264 people in San Francisco had "checked in" to a "Post-Osama bin Laden World" using their smartphones.

News that US military forces killed the 9/11 mastermind was apparently first leaked on Twitter in a public message sent by Keith Urbahn, chief of staff for former US defense secretary Donald Rumsfeld.

"So I'm told by a reputable person they have killed Osama Bin Laden," read a tweet sent by Urbahn about an hour before President Barack Obama announced the operation. "Hot damn."

An IT consultant in the Pakistani city of Abbottabad, who tweets under the name "ReallyVirtual," also unknowingly delivered a real-time account of the raid that killed bin Laden.

Sohaib Athar began tweeting messages about one in the morning local time complaining about helicopters hovering and than a window-rattling blast.

His series of messages at Twitter told of a helicopter crash, a family dying, and Pakistani military swarming the area.

"Uh oh, now I'm the guy who live-blogged the Osama raid without knowing it," he tweeted after connecting Obama's announcement to what was taking place in his neighborhood.

Fresh posts at Athar's Twitter page featured links to pictures of Abbottabad and comments about how he was dodging reporters from television, which he said he quit watching years ago.

"I apologize for reporting the operation unwittingly/unknowingly," Athar tweeted in a jab at how he was being referred to in media accounts. "Had I known about it, I would have tweeted about it 'wittingly' I swear."
Comments